Everton and film star Hugh Grant have invited a fan with down syndrome who appealed for friends on Twitter for a drink when football fans are allowed to return to games, reacting to his message ahead of a Premier League showdown.

Toffees fan Michael Dullaghan has become a social media sensation since posting a heartfelt message last month, admitting that he felt he had “hardly any friends” on the platform.

Describing himself as “friendly” and happy when he was given the chance to “talk to anybody”, the endearing clip drew warm reactions from high-profile figures and has seen the 41-year-old’s following surge to more than 17,000.

Everton winger Yannick Bolasie has struck up a regular exchange with Dullaghan and encouraged him to message him regularly, while Liverpool legend Robbie Fowler and former Evertonians and England stars Michael Ball and Peter Reid have chatted with him.

Hello Michael. Next season, come down to Craven Cottage for the same game and I’ll buy you a pint. Or a glass of sherry as we call them in Fulham.

You’re both welcome at ours for a bevvy when we’re back at the Grand Old Lady. 💙

Legendary goalkeeper Neville Southall and Italian giants Roma have also replied, although arguably the most famous individual to respond to him so far sent an invitation after his latest tweet.

Speaking ahead of the high-flying club’s trip to Fulham in the Premier League, Dullaghan stood in a replica shirt and told the camera how another three points were required at Craven Cottage, finishing: “Come on you Blues.”

Fulham fan Hugh Grant, who has almost 600,000 followers, made reference to the famously upmarket area around the stadium by writing: “Hello, Michael.

“Next season, come down to Craven Cottage for the same game and I’ll buy you a pint. Or a glass of sherry, as we call them in Fulham.”

Everton’s official account replied: “You’re both welcome at ours for a bevvy when we’re back at the Grand Old Lady.”

Maybe the world isn’t so hopeless after all, top man Hugh

Bill Kenwright, the club chairman, sent Dullaghan a selection of kits and a letter by post inviting him to meet Everton’s squad at their Finch Farm training base after reading about his original tweet.

“They would love to see you and maybe you’ll get some of them to follow you on Twitter, too,” wrote the technophobic owner.

“Perhaps you can wear some of the kits or training gear I’ve included in your hamper for all the selfies you’ll be able to take.”

Bolasie was not named in Everton’s ranks but there was good news for Dullaghan and his correspondent in the squad as Dominic Calvert-Lewin scored for Carlo Ancelotti’s side scored after just 42 seconds of the match.

Calvert-Lewin added a second after 29 minutes and Abdoulaye Doucoure made it three before half time as Everton survived a second-half scare, ending a run of three straight defeats with an entertaining 3-2 win. 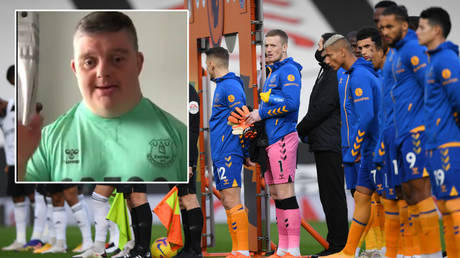 Pandemic could push 130 MILLION in...