Close
Trending News
HomeSport‘If I win the title it will be HUGE for Russia’: Petr Yan on facing Jose Aldo for bantamweight belt at UFC 251

‘If I win the title it will be HUGE for Russia’: Petr Yan on facing Jose Aldo for bantamweight belt at UFC 251

‘If I win the title it will be HUGE for Russia’: Petr Yan on facing Jose Aldo for bantamweight belt at UFC 251

Russian bantamweight Petr Yan says it will be “huge” for MMA in his homeland if he joins the ranks of UFC champions by defeating Jose Aldo in their showdown at UFC 251 on Fight Island this weekend.

For Yan it has taken six fights and two years to reach this point, having gone undefeated in the UFC since making his bow in the promotion in the summer of 2018.

The Siberian-born fighter known as ‘No Mercy’ said this weekend in Abu Dhabi would will be all about fulfilling his quest for gold, and the fact that he will be facing Aldo for that chance – and not Cejudo, with whom he has traded barbs online – makes no difference to him.

“My goal was always to win the belt, not fight Cejudo. Cejudo ran away, it was his choice,” Yan told the attendant media including RT Sport on Fight Island.

“I don’t know why he ran away, maybe he’s not confident in himself. Maybe he found his first girlfriend like he said. But I’m going to fight for the belt now.”

Yan knows his octagon enemy this weekend, having sparred with Aldo in Brazil before he faced Frankie Edgar back in 2016.

Despite detractors claiming Aldo is not worthy of a shot at the 135lbs strap after losing his last two outings – including his bantamweight debut against Marlon Moraes in December – Yan cautioned the Brazilian veteran remained “dangerous.”

“I think [Aldo] deserves to fight for the title, he’s still very famous, he’s a legend of the sport and he’s very dangerous. It’s going to be a very interesting fight.

“My main plan is to win the title, I don’t choose opponents, whoever the UFC matchmakers choose, I’m going to fight and defend my title against them.

“I’m not going to jump divisions, I’m going to focus on bantamweight and defending my belt.”

Yan added that the pair’s familiarity would mean little when they faced off this weekend.

“(Our sparring) was more than four years ago, he didn’t get the better of me at that time, I helped him prepare for Frankie Edgar, since then I’ve become a different fighter, much more experienced and well-rounded, so I don’t think that matters.

“He believes in himself, just like I believe in myself, it will be an exciting fight between two great strikers.”

The rising Russian star said that his biggest weapon was the ability to think on his feet, also predicting that while the fight could go into the championship rounds, he would not leave it up to the judges to determine the winner.

“My biggest weapon is that I like to fight, I know how to adapt during the fight. Mentally I programmed myself so that I cannot back down,” Yan said.

“I think the fight will be 4-5 rounds, but I hope I can finish it early not to leave it in the hands of the judges.”

Russia already has a bona fide MMA megastar in the form of UFC lightweight champion Khabib Nurmagmedov, but Yan said that should he join his countryman in the ranks of title-holders, it would also be “huge” for the country.

Turning to the sadder news of the recent death of Khabib’s father and trainer Abdulmanap at the age of 57, Yan said he had done significant work in supporting MMA in Dagestan and beyond.

“It was unexpected news… he did so much for the development for MMA in his region and in Russia, he was still pretty young, but all of us have our time,” Yan said.

And when asked what kind of champion he would be should he overcome the challenge of Aldo on a stacked UFC 251 card, Yan simply replied: “You’ll find out.”

Watch the UFC 251 press conference with Petr Yan in the video below or at the top of the page. 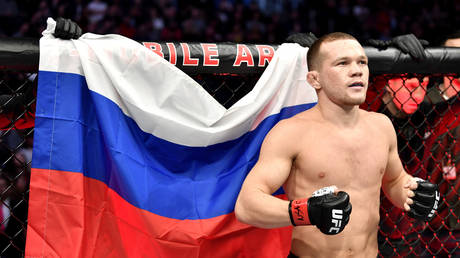 ‘There's a fine line between...

Amazon Music Unlimited is FREE for...