‘If I hit him, he’s going down’: Ex-baseball star Jose Canseco plans on defending daughter’s honor against ‘arrogant’ Logan Paul

‘If I hit him, he’s going down’: Ex-baseball star Jose Canseco plans on defending daughter’s honor against ‘arrogant’ Logan Paul

YouTuber and winless boxer Logan Paul is in the business of talking himself into fights with all manner of celebrities but recent target Jose Canseco says he has more than enough motivation to want to punch Paul in the mouth.

Canseco, 56, unfurled a rather bizarre callout to online sensation Paul earlier this month, writing online that he would “fight anyone of the Logan Brothers they have enough for anyone with any type of talent yet or fighting skills” which, when translated for clarity, apparently means that he wants to be next up on the celebrity boxing circuit against legitimate box office draw Logan Paul.

Paul, who was defeated in his two boxing matches to date by British video gamer KSI, is clearly more literate at social media than Canseco – man more than twice his age – and couldn’t resist the opportunity to remind Canseco that he used to date his daughter, the former Playboy model Josie Canseco.

“No problem,” Paul shot back. “I love smashing Cansecos.”

It was a clear ‘win’, in social media terms at least, for the often controversial Paul – but speaking in a recent radio interview, Canseco said that his desire to throw down with the YouTube star is legitimate.

“I actually met him when my daughter and Logan came down to Vegas,” Canseco told Sports Talk Chicago.

“He seemed like a very nice young kid — to me, seemed a bit on the arrogant side. But, then all of the sudden they broke up.

“I gotta give you the final details, they will come up, but you know, it left me with a little bit of a bad taste in my mouth.“

Paul, though, has other to fish to fry right now. He is signed up for a February exhibition fight with the undefeated all-time great boxer Floyd Mayweather, but when he returns (presumably with a 0-3 record combined in his amateur and professional career), Canseco says he will waiting patiently.

“Get ready, this is real. This is not a joke. If I hit him, he’s going down. Even though I’m 56-years-old, I do have some martial arts and celebrity fighting experience.“

Canseco has appeared in one pro MMA bout to date, losing 77 seconds into the first round against the gargantuan 7ft 2in Hong Man Choi in Japan 11 years ago, and despite landing practically no offence in that brief bout he says he will well prepared to avenge his daughter’s bad breakup with Paul.

“After fighting a guy who’s 7’2″ and 400 pounds, these guys look like shrimps to me. If I get in the ring with him, I’m going to use 270 pounds, get him in the corner and it’s gonna be simple: blunt force trauma. A lot of power.” 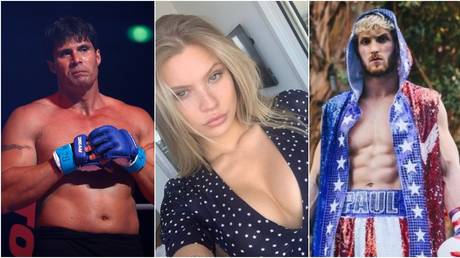 Frank Lampard on the chopping...