Close
Trending News
HomeSport‘If he was on fire, I wouldn’t p*ss on him’: Hall reignites strongman rivalry with Game of Thrones giant Thor ahead of boxing bout

‘If he was on fire, I wouldn’t p*ss on him’: Hall reignites strongman rivalry with Game of Thrones giant Thor ahead of boxing bout

‘If he was on fire, I wouldn’t p*ss on him’: Hall reignites strongman rivalry with Game of Thrones giant Thor ahead of boxing bout

Eddie Hall plans on cementing his position at the summit of the strongman mountain when he takes on Hafthor Bjornsson when the two meet for a boxing match next year, and says there is no love lost between the two behemoths.

Both Hall and Bjornsson have duelled for strongman honors in recent years, turning what was once a friendly relationship between the two into a competitive rivalry which shows little sign of abating and ahead of rumored boxing match between the two to take place next year, Hall says that he will stop at nothing to have the last laugh when it comes time to throw fists.

“Me and Hafthor have been big-time competitors for a long time,” Hall explained to The Mac Life. “We been competing since, I’m going to say, 2011. We’ve got a hell of a history competing against one another. He’s won one, I’ve won one etc.“

However, these continued athletic confrontations slowly developed into an all-encompassing spat between Hall and Bjornsson – who played The Mountain in the hit HBO series ‘Game of Thrones’ – to the point that Hall says that any embers of what was once a friendly relationship have long since been extinguished.

“We absolutely f**cking despise each other beyond belief. If he was on fire I wouldn’t p*ss on him, put it that way,” Hall says. “There’s been constant back-and-forth between me and Thor, and then he did the world record deadlift that I just don’t agree with. They way he broke the record I don’t agree with. I’ve been very vocal about that and he hasn’t liked it.

Hall says that Bjornsson’s recent attempt at the deadlift record was weighted too heavily in the Icelander’s favor, in that the attempt took place in his home gym – something Hall says gives him an artificial advantage.

“The hatred is 100% real. Honestly, the way I’m feeling right now if I saw Thor face-to-face it would take a lot for me not to punch him in the face. So when the boxing match opportunity came around it was a no-brainer. I get to settle a score with somebody that needs settling after so many years, and I get to make a few quid out of it. It’s a win-win for me, really.”

The showdown appears to be the latest in an ongoing trend of well-known figures settling their scores in a boxing ring, and comes after a similar match between YouTubers Logan Paul and KSI was a box office success last year.

And while Hall says he doesn’t have a great deal of experience in the ring, he emphasizes that he will be more than able to handle himself by the time the fight rolls around.

“Let me just be very clear: I had a charity boxing match back in 2012 and I had five boxing sessions prep for that fight,” he says. “In terms of people saying I have boxing experience, I really haven’t. I like training boxing now and again. I’ve done one charity boxing match which was absolutely pathetic.

Regardless of the skills he brings with him into the ring, Hall states that he is very hard to beat when he sets his mind to a task.

“I know I’m going to win because I’m that kind of guy. I know that I’m going to give it my all, and if I’m confident then you’re f*cked. Like I was confident at World’s Strongest Man 2017 – I had already spent the prize money, God’s honest truth.

“That’s my mindset for this fight. I’m going to leave no stone unturned. Like I said, if Eddie Hall is confident he’s going to beat you, you better turn the other way and f*ck off because I’m going to f*cking beat you.“

That, in essence, is Hall’s message to his foe.

“He can come in all guns blazing. He can think of the advantage the height and reach is going to give him that little edge on me. It’s isn’t. Thor, this is my message to you: you are f*cked. I’m going to fold you in f*cking half.” 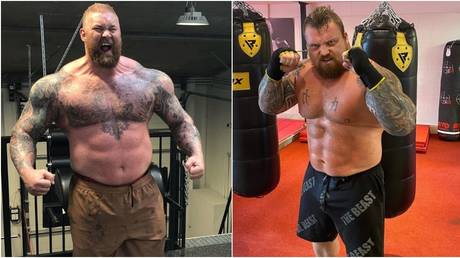