Close
Trending News
HomeSport‘I’d like to apologize… to absolutely nobody’: Burnley fan ‘REFUSES to repent for White Lives Matter banner’

‘I’d like to apologize… to absolutely nobody’: Burnley fan ‘REFUSES to repent for White Lives Matter banner’

‘I’d like to apologize… to absolutely nobody’: Burnley fan ‘REFUSES to repent for White Lives Matter banner’

A Burnley supporter has reportedly defended his move to arrange for a ‘White Lives Matter’ banner to be flown above his side’s Turf Moor stadium during their 5-0 demolition to Premier League champions Manchester City on Monday.

Shortly after kick-off of Monday’s game, a plane was spotted flying above the stadium displaying the banner displaying the phrase and came shortly after all 22 players had kneeled prior to the game in solidarity against the scourge of racism in sport.

Burnley fan Jamie Hepple has reportedly claimed responsibility for the display, which came as an apparent riposte to the spate of displays of support for the ‘Black Lives Matter’ movement which have become commonplace in the English game since the restart of the Premier League last week and prompted the Lancashire club, as well as captain Ben Mee, to strongly condemn the move.

Hepple, though, remained unrepentant. Borrowing a phrase from Irish UFC superstar Conor McGregor, Hepple wrote on his since-deleted Facebook page that “I’d like to take this time to apologise .. TO ABSOLUTELY F**KING  NOBODY!

Burnley have since fiercely condemned Hepple’s actions in a statement. “We wish to make it clear that those responsible are not welcome at Turf Moor,” it read.

“This, in no way, represents what Burnley Football Club stands for and we will work fully with the authorities to identify those responsible and issue lifetime bans.”

Mee, who has been a stalwart at the club since 2012, also spoke of his “shame” at the incident following the defeat to Pep Guardiola’s side.

“We as a group of players condemn it, we’re ashamed, we’re embarrassed. It definitely had a massive impact on us to see that in the sky. We were embarrassed, disappointed, upset. We are embarrassed that our name was in it.

“That they tried to attach it to our club – it doesn’t belong anywhere near our club. Fans like that don’t deserve to be around football.”

Lancashire Police have also stated that they are investigating the matter to determine if any laws were broken.

Fare, a group who work within FIFA and UEFA in anti-discriminatory issues, also condemned the move, calling Hepple’s stunt as another “racist backlash” against the BLM movement.

“The racist backlash against the Black Lives Matter movement across Europe is a trend we have seen and documented,” Fare’s executive director Piara Powar said. 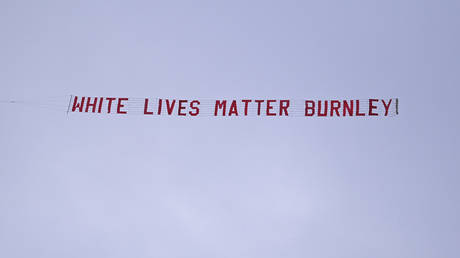