Close
Trending News
HomeSportIce cool: Golf ace fires his way to the top of the leaderboard – thanks to an ICE CREAM VAN (VIDEO)

Ice cool: Golf ace fires his way to the top of the leaderboard – thanks to an ICE CREAM VAN (VIDEO)

Ice cool: Golf ace fires his way to the top of the leaderboard – thanks to an ICE CREAM VAN (VIDEO)

American golfer Matthew Wolff revealed an unusual technique as he battled to claim the top spot on the leaderboard at a Detroit tournament as he used the sound of an ice cream van to keep him calm during his round.

Wolff produced a strong round at the Detroit Golf Club, then finished strongly with a brilliant set of final holes as he finished the day with a three-shot lead at the Rocket Mortgage Classic in Michigan.

The 21-year-old, who isn’t yet one of the sport’s top names, is looking to capture only his second tournament win on the PGA Tour, started to feel a few nerves as he realized he had a chance to put himself in position to win the tournament.

And the American said his form seemed to find another level every time he heard an ice cream van making its way around the course.

“I heard the ice cream truck and I’m like, I have a good feeling about this,” said Wolff as he recounted his remarkable 35-foot putt at the fifth hole.

“Just had that little like ice cream truck song in my head and I think that helped me just not think about the speed or the line or anything, just keep my head free.”

That moment gave Wolff a boost of confidence as his form hit new heights during his round as he made an eagle and three birdies in the back nine to secure an eight-under-par 64.

It took his score for the week to 19 under par, and gave him three-shot lead over the field.

After his remarkable round, Wolff said it felt like he made a birdie every time he heard the ice cream van during his round.

“I’m just going to go out there (tomorrow), have fun and hopefully I hear the ice cream truck a little bit.” 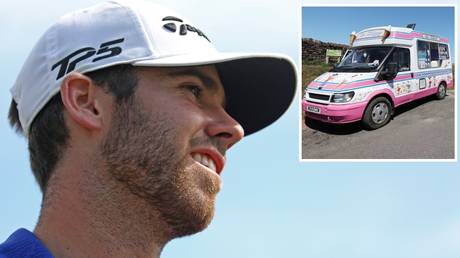