PSG’s Mauro Icardi has thanked wife Wanda for “continuing to trust this beautiful family” in an emotional latest twist to rumors that the football power couple have split up – while she appeared to liken herself to Princess Diana.

The couple have been married since 2014, with Wanda accused of cheating on her ex-husband and Icardi’s former teammate, Maxi Lopez, with the ex-Argentina striker.

On Saturday, mother-of-five Wanda made a cryptic Instagram post in which she wrote: “Another family you ruined for a slut.”

This was believed to be aimed at Icardi, with whom she shares two daughters.

Just in case you’re wondering where the Icardi/Wanda drama is at right now, she’s posted an image of Princess Diana. pic.twitter.com/unHQXNCpi8

Wanda appeared to confirm to an Argentinean journalist, Ker Weinstein, that the pair had split, deleting all of their photos together on her Instagram account, where she boasts more than 8.4 million followers.

The social media sensation reportedly followed her husband with a private detective amid rumors that he betrayed her with a woman named by some reports as actress Eugenia ‘La China’ Suarez.

Wanda then showed off a ring-less finger on her left hand and said it looked better without a wedding band, while Suarez was quoted by Spanish newspaper Marca as having told former Inter Milan forward Icardi: “Someday we have to get out and f*ck – somewhere in the world where they don’t know you.”

In Brazil, UOL claimed that Suarez used the “more discreet” Telegram messaging service as opposed to Whatsapp in order to conduct their affair.

But Suarez, who has a sizeable 5.2 million following on Instagram herself, has insisted she has “no idea where all this came from”.

“Whoever it may be, I don’t even know them. I myself have just separated,” Suarez added.

Icardi now appears to have made a groveling post on the social media network, sharing a photo of the pair embracing.

“Thank you, my love, for continuing to trust this beautiful family,” he wrote in his caption.

“Thank you for being the engine of our lives. I love you. How much it hurts to hurt your loved ones. You only heal when you have forgiveness for those you hurt.”

He also uploaded another snap of the troubled couple with a message that read “Hold me tight and never let go of me”, while Wanda seems to have compared herself to Princess Diana in one post on her stories.

Icardi’s apparent off-field struggles seem to have started affecting his day job, with PSG coach Mauricio Pochettino confirming that the player had “not trained with us over the past couple of days for personal reasons”.

The 28-year-old was a late exclusion from the matchday squad that beat visitors RB Leipzig 3-2 in the Champions League on Tuesday. 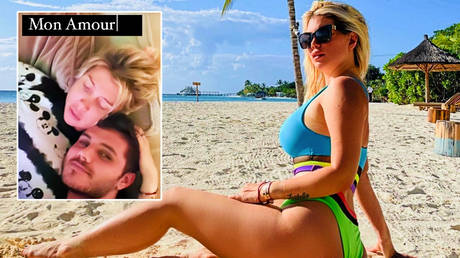 How to reveal the Command symbol i...