Four-time Grand Slam doubles winner and Olympic medalist Vera Zvonareva says Novak Djokovic shouldn’t be judged too harshly after the Serbian star was slammed for hosting a tour which led to a spate of Covid-19 cases.

“I wouldn’t criticize him hard, but I would say that maybe he rushed into it too much. Maybe he didn’t take all the measures that he should have taken to avoid such consequences. If you aren’t able to provide safety for players, audience, people around, it’s better not to do that,” Zvonareva said.

“It’s a complicated situation I’m sure that he tried his best to give opportunities to some players to get back to the court and compete. But maybe some safety measures were not taken properly.

“Maybe everyone thought that Serbia and Croatia were ready to have those international events. Maybe their government should have said something like ‘We are not yet ready.’ Maybe Novak thought that they are fine and everything would be OK. And that was a mistake. Of course it raised a lot of concerns for other events as well,” the player added.

Zvonareva, who has won two Grand Slam titles each in doubles and mixed doubles, said uncertainty surrounds the upcoming US Open which will be held despite coronavirus fears.

“I think it’s a very difficult question for all the tennis players at the moment. On the one hand everyone wants to compete and go, especially, you know playing in New York is always something special. Everyone loves being there. But at the same time everyone is a little bit concerned about health situation, the measures that will be taken. The USTA announced that they will held the US Open the same dates as it was officially planned,” she said.

“Everyone isn’t yet sure if they are able to travel to the US at the moment because, there are not so many flights. Some people still get a visa to go to the US and you know some consulates are still closed. But for sure players would love to start competing, but safety comes first.”

The former world number two stressed that a great number of players are dreaming of playing at the US Open, however there are still concerns that the tournament could lead to an outbreak of new coronavirus cases.

“Of course there’s a chance. When you have 256 singles players travelling from different parts of the world taking the planes with their team members. Plus there will be 128 doubles players. Of course it’s a high risk. Perhaps it’s a little bit early to have competitions, because tennis is very very international.

“Players are now concerned about points and rankings. If they don’t play they will drop in the rankings in contrast to other players who will be able to play during that period,” the player said.

Recalling the toughest games she has ever had during her career, Zvonareva named US superstar Serena Williams as perhaps her most difficult opponent.

“Of course it’s always tough to play against Serena, she is such a powerful player. She’s won so many Slams and surely she is one of the most toughest competitors out there,” Zvonareva said.

“She has an all-around-the-court game, she is able to serve very hard. But at the same time she can place the ball wherever she wants. She not just about the power, she is also a crafty player, she reads the game. She understands the moment when she needs to play the certain way. She can also change her game plan during the match, not so many players are able to adapt quickly. There are many things that make her great,” the athlete added.

Zvonareva, who has 12 WTA titles to her name, said that winning an Olympic bronze medal was the biggest victory in her career.

“One of the biggest victories for me is beating Li Na who is a Chinese super star. I was playing against her for the bronze medal in Beijing. It was a very special win for me,” Zvonareva said.

“You are waiting for Olympics, you go there and then you lose your semifinal. But you still have a chance to win a medal. So you lost the match, you are very disappointed, but you still have to go back the next day and try to get that bronze medal. And if you don’t, you know you feel like you are finished fourth, but you have nothing. You fought so hard but at the end of the day you have nothing.

“I couldn’t sleep after my semifinal loss, but I still needed to go out there and compete. I did my best, I played great tennis. I beat the Chinese player in Beijing for the bronze medal. For sure that match was special.” 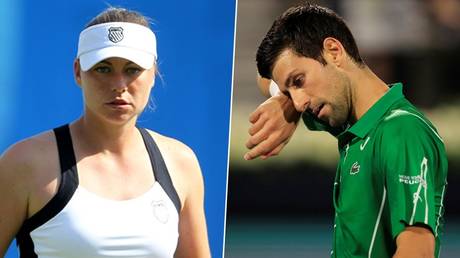 School trips will be BACK ON from...

Apple Black Friday 2021 deals: What to expect this November