Close
Trending News
HomeSport‘I would love nothing more than to KILL somebody in the ring’: Sean Strickland says he’s UFC’s ‘Grim Reaper’ after latest win

‘I would love nothing more than to KILL somebody in the ring’: Sean Strickland says he’s UFC’s ‘Grim Reaper’ after latest win

‘I would love nothing more than to KILL somebody in the ring’: Sean Strickland says he’s UFC’s ‘Grim Reaper’ after latest win

UFC middleweight contender Sean Strickland says that he would feel absolutely no remorse if he killed an opponent in the octagon after he bullied Uriah Hall en route to a lopsided decision win in Las Vegas on Saturday night.

Strickland improved his career ledger to an impressive 24-3 as he breezed past Hall through five rounds inside the UFC’s Apex facility, erasing the New Yorker’s four-fight winning streak in the process and informing the rest of the UFC’s middleweight fold that there is a new contender in town at 185lbs.

And judging by his performance, it is easy to see why. Strickland appeared the far superior fighter on the feet, something which came in clear contrast to Hall’s fight week declaration that he saw his opponent as being “sloppy” as he used his pinpoint jab to dominate in what was a technical masterclass from the 30-year-old.

On the mic after his win, Strickland made clear how much his journey in mixed martial arts has changed his life, saying that had not pursued his dream of being a professional sportsman he would likely be “cooking meth in a trailer”.

He was quick to note that he’s never used illegal drugs in his life, but assumes that is a path he might have waded down given what he sees as his addictive personality – something he joked was evident by his fondness for skin flicks.

“Are you kidding me?” he said of his pornographic hobby. “I’m a man in the UFC, that’s everyone’s problem.“

One might have gathered by now that Strickland isn’t quite beholden to the type of clean-cut talking points reporters are often fed in press conferences, and also enthused about how much he enjoys hurting his opponents in the cage.

“If you like to f*cking hurt people, you’re in the right sport,” he said. “I would love nothing more than to kill somebody in the ring. Nothing more. It would make me super happy.

Sean Strickland if he wasn’t in UFC pic.twitter.com/3QzddcLKLn

sean strickland if he wasn’t in the UFC pic.twitter.com/Mu4HK2GFdh

Comments like those which might make UFC brass wince, but Strickland says that he is under no illusions that Dana White wouldn’t want someone like him as champion and representing a multi-billion dollar brand.

“I’m probably the last person they want as the champion,” he said. “‘So, Sean, what do you think about the UFC?’

“I mean it’s cool, they pay me well, it’s cool. I’m the last one they probably want to be the champion.

“I’m going to fight somebody in a few more months. I might win, I might get knocked out. I just like to fight. I like to make money. If I go somewhere with it, great.

“If not, what did Derrick Lewis say? What was his last quote about if you let me run the division, you guys should all retire? I love Derrick Lewis. He’s the man. I’m just happy to be here.” 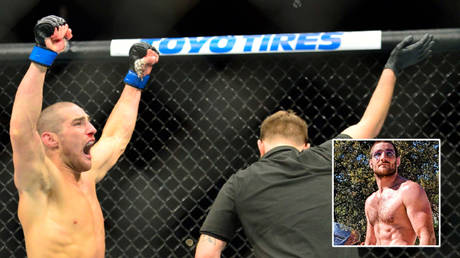