I won’t repeat US Open mistake, says Djokovic as he starts campaign at Roland-Garros

I won’t repeat US Open mistake, says Djokovic as he starts campaign at Roland-Garros

Novak Djokovic said he is ready to move on from his disqualification at the US Open as he prepares to open his French Open campaign on Tuesday.

Djokovic was ejected from Flushing Meadows earlier in September after he accidentally struck a lineswoman in the throat after hitting a ball away in frustration during his fourth-round clash with Pablo Carreno Busta.

The 33-year-old said the is making an effort to keep himself in check to avoid a repeat of what happened in New York.

“I will make sure I don’t make the same mistake twice,” he said. “I try to keep my negative reactions as less as I can. But I guess it happens.”

The Serb is also confident that doing so won’t diminish his efforts on court: “I did not feel any kind of emotional disturbance or difficulty to actually be able to play or still express my emotions in whatever way.”

Djokovic has already bounced back from his disappointing exit at Flushing Meadows by warming up for Roland Garros with a victory at the Italian Open on clay, the fifth time he has won the competition.

He believes his victory in Rome shows he has not been affected by what happened in the United States.

“I don’t think significantly it does impact me that I’m unable now to show the fist pump or scream or something like that,” he said. “It has happened in Rome already and everything is fine. I’m back to normal.”

“I really want to be my best version as a player, as a human being on the court, and win a tennis match,” he added.

The no. 1 seed will take on Mikael Ymer on Court Philippe-Chatrier on Tuesday as he continues his quest to win his 18th Grand Slam singles title, which would place him one behind Rafael Nadal and two back on Roger Federer.

Djokovic has reached the final at Roland Garros on four occasions and won once, beating Andy Murray in 2016.

Nadal, who has won the French Open a record 12 times, will be the biggest obstacle standing in Djokovic’s way in Paris.

He did not face the Spaniard in Rome after the ‘King of Clay’ suffered a shock quarterfinal exit at the hands of Diego Schwartzman.

Nadal looked comfortable in his opening-round victory over Egor Gerasimov on Monday, though, as he eased to a 6-4, 6-4, 6-2 win.

No. 3 seed Dominic Thiem, who won his maiden Grand Slam title at the US Open following Djokovic’s disqualification, saw off Marin Cilic 6-4, 6-3, 6-3 on Monday and will face Jack Sock in the second round. 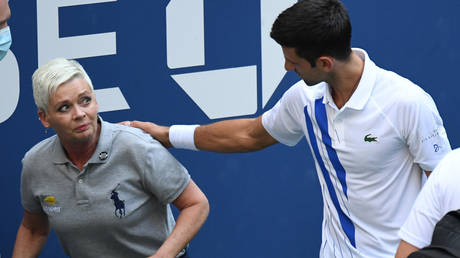