‘I WISH I could tell you more’: Maria Sharapova’s tennis ace ex-lover tells ‘JEALOUS’ admirer that Russian is ‘in a good place’

‘I WISH I could tell you more’: Maria Sharapova’s tennis ace ex-lover tells ‘JEALOUS’ admirer that Russian is ‘in a good place’

Tennis star Grigor Dimitrov has kept his lips largely sealed after an intrusive press conference question about ex-girlfriend Maria Sharapova, revealing that he kept a “good relationship” with the Russian former world number one.

French Open outsider Dimitrov was reflecting on his straight sets second round win at Roland-Garros when a reporter asked him about his “contacts” with former girlfriend Sharapova, who he dated between 2013 and 2015.

In a bizarre departure from talk of tennis, the reporter admitted they were “always quite jealous” of Dimitrov and asked whether he remained in touch with Sharapova, as well as whether the Bulgarian knew of her latest activities.

“You can still be jealous,” joked the world number 20, who asked Sharapova out after they exchanged calls and messages when he was 21 and has met his former flame at subsequent tournaments.

Meanwhile, Grigor Dimitrov was asked about his ex of 4 years ago. pic.twitter.com/LGnE6dxO9b

Double evidence that Grigor is a true gentleman. That he was so tolerant and obliging with a silly question, and that he spoke very respectful and discreet towards a lady who happens to be his ex. Top marks.

What the hell is this? 🙄🙄🙄
Thanks for tweeting about it.

“We have always kept a good friendship, a good relationship. I’m not worried about her.

“I think she’s in a good place in her life. She’s also the type of person that when you make such a decision and transition, you know it’s for the right and the good.

Dimitrov seemed understandably surprised at the suggestion of mystery around the movements of Sharapova, who proudly portrays her post-retirement life on a regular basis to her following of more than four million on Instagram.

Since retiring in February, the 33-year-old has posted frequent highlights from her Los Angeles home, including trips to luxury hotels, hikes around beauty spots, gruelling fitness sessions and snapshots of her busy social life.

She split from Dimitrov at the 2015 Wimbledon tournament. “I was supposed to be focused – getting prepared for my own matches, my own triumphs and defeats, on the largest stage of my career,” she later wrote in her autobiography.

“I had been watching his match that day only because I’d lost early at those championships.

“So his good memory was my bad memory. What meant everything to him happened only because I had lost.”

Fans on Twitter were dismayed at the latest example of Dimitrov’s familiar grillings about Sharapova. “Double evidence that Grigor is a true gentleman,” said one.

“That he was so tolerant and obliging with a silly question, and that he spoke very respectful and discreetly towards a lady who happens to be his ex. Top marks.” 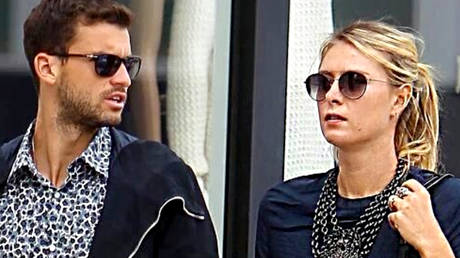