Close
Trending News
HomeSport‘I will not return’: Record-breaking gymnast makes emotional retirement after eighth Olympics appearance with Uzbekistan at 46yo

‘I will not return’: Record-breaking gymnast makes emotional retirement after eighth Olympics appearance with Uzbekistan at 46yo

‘I will not return’: Record-breaking gymnast makes emotional retirement after eighth Olympics appearance with Uzbekistan at 46yo

Legendary 46-year-old gymnast Oksana Chusovitina, who won gold with the former sports team of the Soviet Union in 1992 and has since represented Uzbekistan and Germany, has admitted to “tears” and “grief” after her final Games.

Gymnastics great Chusovitina first competed in gymnastics almost 40 years ago, becoming a key member of the Soviet team who dominated on the world stage and winning gold at the 1992 Barcelona Olympic Games with the Unified Team shortly after turning 17.

Born in the Uzbek city of Bukhara, she danced to ‘The Phantom of the Opera’ while representing the country of her birth between 1993 and 2005, then switched to Germany, where she had received financial and coaching support from members of the country’s sporting and medical communities after being diagnosed with acute lymphocytic leukemia in 2002.

Uzbekistan released Chusovitina in 2003. Her astonishing haul of 32 major senior medals included silver at the 2008 Beijing Olympic Games, and she only initially decided to retire and concentrate on coaching following a fifth-placed finish at her sixth Olympics, when she took part in the London edition in 2012.

She was the oldest gymnast ever to compete at the Games when she went to Rio as a 41-year-old in 2016, having switched back to Uzbekistan in 2013.

Chusovitina returned to the all-round discipline from the vault for the Tokyo Games, which she reached by securing one of the final qualification spots for her nation.

Addressing her “dear friends and my fans”, Chusovitina admitted it was “very hard” to discuss her retirement, which she had expected to be “much easier”.

“There were tears of joy and tears of grief but I don’t regret it for a single minute. My sports life has been great – and, most importantly, I have you.

“Your love and support is the most invaluable wealth in my life. Thank you for everything.”

Chusovitina has said that she has many ambitions she now wants to make time for after dedicating decades to her sport.

Two-time Olympian and three-time US National champion Johnny Weir told her: “Queen. Thanks a lot for the inspiration.”

Jamaican gymnast Danusia Francis added no fewer than eight exclamation marks as she wrote: “An icon forever. What a career.”

Ukrainian ex-world champion Lilia Podkopayeva wrote: “You are an example and a guide for many generations. Thank you for the joy and inspiration that we felt looking at you.”

“Our pride, our legend, our everything,” added one adoring supporter. “Thank you for everything.

“Such people should be rewarded for their patriotism and love for their work and their country. I wish you happiness, health and all the best. We all cried with you.” 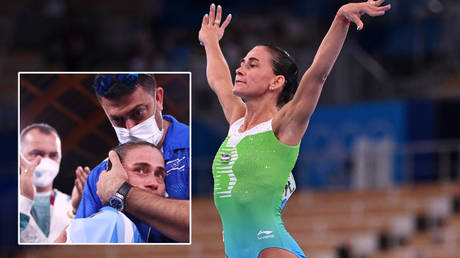