Close
Trending News
HomeSport‘I was a little shaken up’: Rookie racer comes out unscathed after HUGE crash at Indy 500 (VIDEO)

‘I was a little shaken up’: Rookie racer comes out unscathed after HUGE crash at Indy 500 (VIDEO)

‘I was a little shaken up’: Rookie racer comes out unscathed after HUGE crash at Indy 500 (VIDEO)

Sunday’s Indianapolis 500 saw Japanese racer Takuma Sato end up the winner, but the race wasn’t without drama, as rookie driver Oliver Askew was involved in a huge crash while trying to avoid spinning rival Conor Daly.

The annual race at the Indianapolis Motor Speedway is one of the fastest motor races on earth, with the cars exceeding 220 miles per hour down the long straights of “The Brickyard.”

But the speed of the racetrack, coupled with the and G-forces around the turns, make the 2.5-mile oval circuit anything but simple as the drivers face a constant battle for grip and handling during the 500-mile race.

When accidents come, they happen in the blink of an eye, and they can often be as scary as they are spectacular as cars hit the wall at high speed.

And that’s exactly what happened when Daly lost control of his Chevrolet car and spun during the restart after a yellow flag on lap 92 of the 200-lap race.

But Daly’s spin wasn’t the major incident as, while he attempted to prevent his car from connecting with the wall, fellow driver Askew tried to avoid the spinning No. 47 car.

Unfortunately, Askew’s attempts to avoid Daly ended in disaster as, instead of avoiding trouble, he drove straight into it.

Askew swerved to miss Daly’s car, and the cloud of smoke caused by the spinning car’s tires, but ended up losing control of his own car and smashing at high speed into the wall, which was protected by a special safety barrier.

A massive crash for Oliver Askew in the #Indy500.@IMS added SAFER Barriers designed for safety, and we’re so glad they exist as he and Conor Daly are OK. Watch the race on @NBC: https://t.co/B6M3MXYpFe pic.twitter.com/2T6m3Y8ZYL

Daly was swiftly taken out of his car, while Askew needed a little longer to recompose himself before he was able to get out of his destroyed car. Both were taken to the on-site medical center and given a clean bill of health.

Speaking to NBC Sports after emerging from the medical center, Askew said, “I’m OK, but I was a little shaken up after that hit. I think I got the wind knocked out of me and banged up my knee a little bit.

“But I do want to say thank you to Dallara and IndyCar for making these cars so safe. And to our safety crew as well. A little shaken up by that, but a big sorry to the team. We were having a good run there being very aggressive on strategy, and the car felt really good. 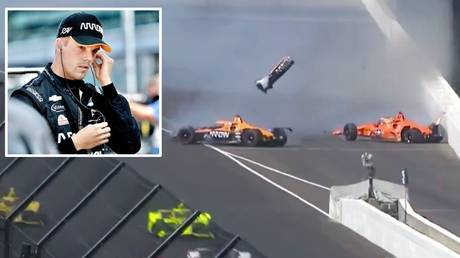