‘I was 18’: UFC newcomer Hansen hints she was BRAINWASHED to show support for pro-Trump Black Lives Matter critic Candace Owens

‘I was 18’: UFC newcomer Hansen hints she was BRAINWASHED to show support for pro-Trump Black Lives Matter critic Candace Owens

Kay Hansen, the 20-year-old UFC rookie who won her first fight after a punter bet $37,000 on her at the weekend, says a sports bra she wore at a weigh-in supporting activist Candace Owens was spawned by a “toxic environment.”

An MMA account on social media shared a photo of strawweight starlet Hansen at a weigh-in during her rise to the octagon with the Invicta Fighting Championships, wearing a top with the message “I like the way Candace Owens thinks.”

After seeing the post accompanied by a series of vomiting emojis, the Californian distanced herself from Owens, who has caused controversy in recent weeks by downplaying the coronavirus pandemic, speaking out against vaccines and attacking George Floyd, the African American man whose death at the hands of police has sparked protests across the world.

“I was very young and in a manipulating and toxic environment during that time in my life,” replied Hansen, who has also previously been seen wearing clothes carrying anti-abortion messages. “I was also very young. Views and opinions evolve as well. Take all of this in to account before you jump on a hate train.”

I was very young and in a manipulating and toxic environment during that time in my life. I was also very young. Views and opinions evolve as well. Take all of this in to account before you jump on a hate train

When one of Hansen’s fans from her third-round victory over former Atomweight champion Jinh Yu Frey asked her to expand on her views, she told them: “That information is super personal and I’m healing so I’m not really interested in sharing at this time.”

She admitted that her newfound prominence had been an eye-opener into the scrutiny of being a UFC fighter on social media and pledged not to become “another fake persona of someone in the public eye.”

“I was manipulated and kind of heavily influenced into portraying myself in a certain way,” Hansen told MMA Fighting. “Whether it was for marketing purposes or whatever, I was kind of in an environment and I didn’t know how to get out.

“And I was 18, so I was easily persuaded. People are so quick to think they know me and think they know what I believe in and what my views are. I’m not even the same person that I was in those pictures.

“It just kind of sucks that it was all on a big stage and it’s something I didn’t want to do in the first place. Now it’s coming back and people are like, ‘I hate you.’ Cool, you probably hate me either way, so whatever.”

I was a Kay Hansen fan for about one full weekend…

Same. They teach hate so young

An account dedicated to female MMA fighters labeled Hansen a “white supremacy queen” for her views, while a critic wrote: “I was a Kay Hansen fan for about one full weekend.”

Some fans argued that fighters should not be judged on their political views, but an opponent of Owens, who is a supporter of US President Donald Trump, added: “Same. They teach hate so young.”

Hansen had her first sanctioned fight as an 18-year-old in 2017 and has a record of seven wins from 10 professional encounters.

She used a question-and-answer session with fans on Twitter to confirm that she had earned $78,000 from her win over Frey – including a $50,000 Performance of the Night bonus – and revealed that flyweight champion Valentina Shevchenko would be her dream sparring partner. 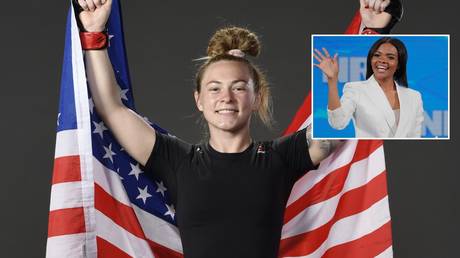