Close
Trending News
HomeSport‘I wanted to p*ss him off’: Russian badboy claims Cristiano Ronaldo was RAGING after being ELBOWED in Champions League row

‘I wanted to p*ss him off’: Russian badboy claims Cristiano Ronaldo was RAGING after being ELBOWED in Champions League row

‘I wanted to p*ss him off’: Russian badboy claims Cristiano Ronaldo was RAGING after being ELBOWED in Champions League row

Russia prospect Dmitri Barinov has claimed Cristiano Ronaldo swore at him after being elbowed in the back by the Lokomotiv Moscow star last year, allegedly reacting angrily while playing for Juventus in the Champions League clash.

Portugal legend Ronaldo failed to score in two matches against Lokomotiv last season, starting both games as Juventus edged past the Russian side by winning 2-1 on both occasions.

Ronaldo was substituted in Moscow before a last-gasp winner gave Juve victory, while the Italian giants needed two late Paulo Dybala goals to avoid defeat in the first of two encounters in which badboy Barinov played every minute.

The 24-year-old midfielder, who stunned commentators with a startling aerial challenge reminiscent of a clothesline wrestling move during a Russian Premier League match earlier this year, has admitted that he targeted the superstar with a cynical attempt to rile him.

The Russian Premier League turned into the WWE today!

Just a yellow card for this outrageous move by Dmitriy Barinov! https://t.co/iWV0M7KnC3

“He was jogging – I ran past and hit him in the back with my elbow,” tough-tackling Barinov told Championat about the on-pitch altercation.

“I wanted to p*ss him off. I just ran by and thought, ‘I’ll give you an elbow.’ He started to say something to me – “f*ck you, f*ck you”, something like that.

“I began to turn to the referee. Why am I like this? I do not know. I am very hot-tempered.”

Barinov also confessed that he attempted to wind Ronaldo up before a subsequent corner, although he said that Russian official Stanislav Sukhina has since tried to help him curb his impulses.

The former EURO Under-19 team of the tournament nominee was booked three times in five matches at the start of this season, only to suffer a cruciate knee ligament injury that has kept him out of the Champions League after playing only four domestic matches.

“Life has become calmer but on the football field it will not [change],” he promised. “Although it has got better on the pitch.

“[Sukhina] helped me a lot – I’ve spoken with him two or three times. He came up to me, sat down at the table and said: ‘Bara, at every council of referees, only you are discussed. Let’s be calmer.'”

The alleged incident with Ronaldo was not picked up by viewers, although Barinov was booked for a foul in the 90th minute in Turin as a famous result slipped away from Lokomotiv.

UEFA had named Barinov as one of the players in the group to watch prior to his meetings with Ronaldo, singling him out after he had made his Russia debut during the summer.

Barinov scored the winner as Lokomotiv won 2-1 at German side Bayer Leverkusen in their opening game, but they lost all of their remaining matches to finish bottom of the group and miss out on a Europa League place. 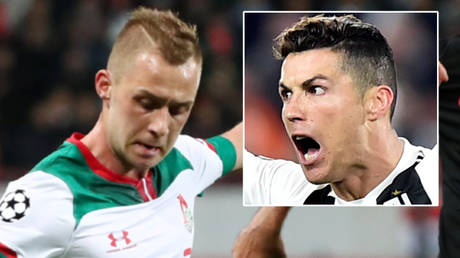