‘I want to win against Rafa’: Daniil Medvedev reveals plans after beating world No. 1 Novak Djokovic

‘I want to win against Rafa’: Daniil Medvedev reveals plans after beating world No. 1 Novak Djokovic

Russian tennis ace Daniil Medvedev has said he wants to claim his first win over Spanish legend Rafael Nadal whom he might face in the semi final of the ATP Finals after beating world number one Novak Djokovic of Serbia.

The 24-year-old Russian produced a stunning performance on Wednesday defeating the 17-time Grand Slam winner in straight sets 6-3 6-3 to book a spot in the final four.

READ MORE: ‘It’s been a strange year’: Novak Djokovic admits to ‘mixed emotions’ after claiming ATP’s world No. 1 crown for 2020

This was Medvedev’s third win out of his last four encounters with Djokovic, who still can progress to the semi final if he beats Alexander Zverev.

“To be completely honest, I am sure he didn’t play his best today. But still, it happens to everybody,” Medvedev said after his win.

Sum up @DaniilMedwed‘s performance in one word! ⬇️

“I always say the Big Three are the champions because it happens less to them than to other players. It is still tough to beat them, even on their bad days so I am really happy about the win. I am feeling good (and) confident right now.”

The 2019 US Open finalist said that both of his possible semi final opponents – Nadal and Stefanos Tsitsipas – are tenacious, adding however that he dreams of securing his maiden victory against the Spaniard.

Is Daniil your pick to go all the way?

“Both are tough opponents. I lost against both of them last year, so from both sides it’s gonna be an interesting match. Against Stefanos, we have this rivalry, we are both young. We’re gonna have probably a lot of matches to come, so it’s always fun to play against him in many ways. Sometimes in bad ways; sometimes in good ways,” Medvedev said.

“Rafa is one of the best tennis players in the history of sport. Of course I want to get a win against Rafa. I still don’t have one. So, yeah, as I say, no matter who I play, I’m gonna be happy to face him,” he added. 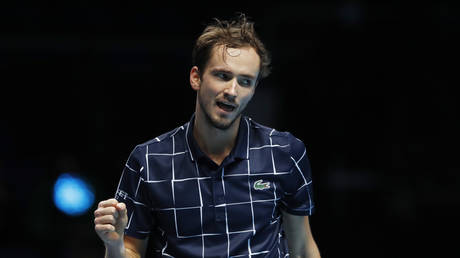 Lorraine Kelly in furious rant at...