UFC champ Khabib Nurmagomedov’s younger cousin, fellow lightweight Usman, has signed for Bellator and could fight before the end of the year in a coup for the promotion after the unbeaten prospect had been tipped to join the UFC.

Nurmagomedov underlined his potential earlier this year when he raced to a 40-second win with his illustrious relative in his corner at UAE Warriors 12, leading many to believe that a move by the UFC to sign him was a near certainty.

The 23-year-old had frequently fought on Global Fighting Championship but has now been snapped up by Bellator in a coup for the promotion that officials said could result in a lightweight debut in December or January.

“I want to announce my brother [Usman] has signed a multi-year deal with Bellator,” his cousin wrote on Instagram, thanking Bellator, management company Dominance MMA and its boss, Ali Abdelaziz, for the “opportunity”.

Confirming the signing and the promotion’s evident ambition to sign more rising contenders, Bellator President Scott Coker said: “We are making it clear that Bellator is home to the best fighters on the planet and an organization where the sport’s future stars are coming to compete.

“I am thrilled to have Usman join the promotion and he will be placed in an immediate position to showcase his skills and contend at 155-pounds.”

Bellator featherweight champion Patricio Freire won the lightweight title by knocking out Michael Chandler in little more than a minute at Bellator 221 in May, making his second appearance at the weight after losing to Benson Henderson in 2016.

After Nurmagomedov increased his personal professional record to ten fights with that lightning win in July, Abdelaziz lauded him as “better than Khabib” and a combination of his cousin, former light heavyweight champion Jon Jones and middleweight title holder Israel Adesanya.

Nurmagomedov is rated as a well-rounded fighter thanks to the variety of methods with which he has achieved his ten premature finishes to fights so far.

The most recent of those came on an emotional occasion at the Abdulmanap Nurmagomedov memorial event in Moscow last month, which he described as “the most important victory of my life” after stopping Svyatoslav Shabanov in the second round.

The switch is likely to end the prospect of any collision between the cousins and lead to a move to the UFC should Nurmagomedov continue his impressive record with Bellator.

“It could [be] a way to turn the lightweight Nurmagomedov reign into a multigenerational legacy,” said one fan. “Good job Bellator, snatching him. Missed opportunity by the UFC.”

Khabilov previously had an eight-year, 13-fight run in the UFC that included a unanimous decision victory over Jorge Masvidal back in 2013. But now he’s agreed to become a Bellator fighter, and confirmed the news via his Instagram page.

“Greetings to all my fans and all those who follow my career!” he posted.

“Eight years under the auspices of the UFC flew by quickly, and our cooperation came to an end. I would like to thank the UFC leadership for giving me the opportunity to declare myself to the whole world and prove myself.

“From today onward, I am a Bellator fighter. I signed a new contract and this will be another boost for me in my career. Bellator is the leading organization in the world of MMA, which very often holds its fights in the United States and Europe, and this organization has many new challenges for me.

“I would like to thank my managers @aliabdelaziz000 and @rizvan_magomedov, they are truly professionals in their field who work with me to the end and create comfortable conditions. Now in my career, my new goal is the Bellator belt!” 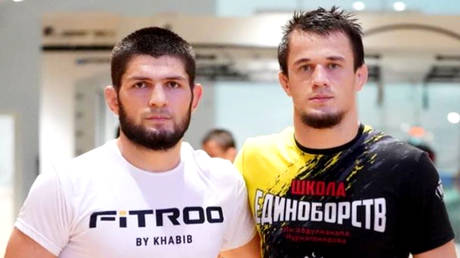 Trick or treating BANNED in lockdo...

'Imagine what he NORMALLY wea...