Reigning US Open title holder Bianca Andreescu says she is aiming to earn a name among the all-time greats of the sport, including targeting the remarkable title haul of American icon Serena Williams.

The 20-year-old Andreescu, who sensationally beat Williams at last year’s US Open final, becoming Canada’s first ever Grand Slam singles champion, said she dreams of winning even more titles than her famous US opponent, who has 23 Majors to her name.

“I want to surpass Serena [Williams] and her wins. Maybe even Chrissy Evert, who knows? Margaret Court,” she said.

“I like to dream big; it gives me more motivation to actually step on the court and continue doing what I’m doing.”

Andreescu has claimed one major title so far and has a long way to go to break Williams’ record. The famous American is still aiming to tie Australian great Margaret Court’s all-time achievement of 24 Grand Slams, but has lost her last four finals at Majors.

“Surpassing those players would make me the best but whatever God has in store for me.”

The Canadian is getting ready to defend her US Open, as the tournament is expected to go ahead at the end of August despite the Covid-19 crisis. 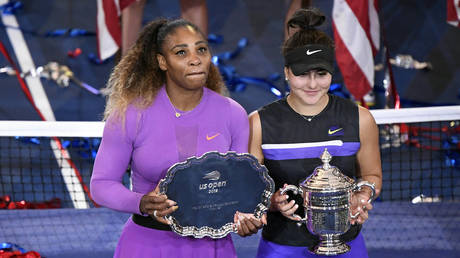