Russian figure skating champion Elizaveta Tuktamysheva has supported calls to raise the age limit for female competitors, explaining that it would help to make women’s skating more “feminine and mature.”

Talking to RT Sport, the former world and European champion expressed her attitude towards the quad craze in women’s skating and revealed the secrets to making a free program online with the help of fans.

Tuktamysheva, who is the only non-teenage skater to land a quad, said she would support the idea of raising the minimal age for junior skaters who are now eligible to join senior competitions from 15.

“I support the idea of raising the age limit in ladies skating, because it’s important for me to make figure skating look spectacular and beautiful. I wish skaters’ programs were well-balanced, having a full package of chorographic and technical elements. I want to see feminine and mature skating, so yes, I think raising the age limit is a good idea,” the skater said.

Fashion trend-setter Tuktamysheva continued to amaze her colleagues by becoming the first skater in history to make her free-program online in close cooperation with her followers. The athlete was satisfied with the result, revealing that she received precious experience from innovative training sessions.

“The idea to make a program online was proposed by a very creative choreographer, Yuri Smekalov. I was the first skater to try out this kind of format. Making a free routine at home with limited space was very unusual.

“I could have easily broken a TV set when overwhelmed with emotions. We held online streaming of our training sessions and my followers took part in creation process offering to include moves or make some amendments. The main idea was to invite audience and to make program together. On the whole I’m satisfied with the result, as the program looks nice on the ice,” the skater explained.

Talking about the modern quad-jumping trend in women’s skating, Tuktamysheva admitted that it’s impossible to hold leading positions without having impressive technical content.

“You can be selected to the national team without having a quad, but world leadership is impossible without ultra-c elements. Alena Kostornaia, who won all major events last season, had a triple axel which she placed both in short and free programs,” Tuktamysheva said.

“Quadruple jumps are a very interesting trend. Skaters don’t know their limits. Of course, it’s a difficult element, but if you learn it right, you can make more skaters acquire it. I have always loved jumping, I want figure skating to develop and become more fascinating and spectacular,” she added.

Tuktamysheva agreed that professional athletes sacrifice their childhood to achieve high results in sport, but added that figure skating provided her with huge opportunities and “discovered the whole world for her.”

“Every athlete has gone through difficulties because elite sport is harsh. But I’m the kind of person who will not force myself to do something. When I was a kid, I faced various obstacles and difficulties, but I always knew that figure skating was my future. My mother never forced me to skate, on the contrary, she told me, ‘if it’s difficult for you to skate, let’s change school and you will be an ordinary kid,’” she said.

“But I loved travelling much and then I entered [Alexei’] Mishin’s group in St. Petersburg. It wasn’t easy to live between the two cities, but it was me and only me who decided to embark on a skating career. Nobody made me do that.

“Of course, my childhood was replaced by sport and I couldn’t spend much time with my friends. But on the other hand, I got new friends I met at various training camps and competitions. So I discovered a whole new world having friends not only in my home city, but across the globe. I had the whole world in front of me and it was by far cooler than other kids’ childhood.”

The skater, who has always been praised for her stamina and determination to win, revealed that her weak spot is an inability to make plans.

“I postpone everything till the last moment and this is my main disadvantage. Most of the time I control my life, but sometimes I like to live in chaos. Order can be achieved only if I write down all my plans into a notebook. But sometimes I really love it when something goes off course. I can change my plans in the snap of a finger. This is ok for me, but I’m not sure my friends love it,” she said. 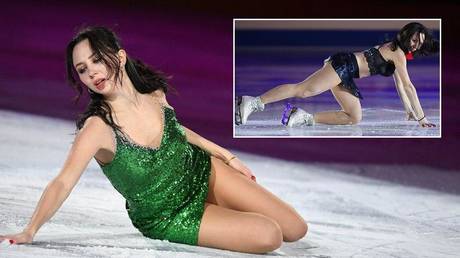