‘I want to improve my legacy’: Vasyl Lomachenko targets another title ahead of Teofimo Lopez showdown (VIDEO)

‘I want to improve my legacy’: Vasyl Lomachenko targets another title ahead of Teofimo Lopez showdown (VIDEO)

Ukrainian boxing superstar Vasyl Lomachenko says he sees his upcoming fight with Teofimo Lopez as a legacy fight, and believes he’ll be facing one of the world’s best when they face off on October 17.

Lomachenko has already captured the WBA (Super), WBO and “The Ring” world titles at lightweight, and will take on America’s current IBF champion Lopez in a title unification bout at the MGM Grand Conference Center in Las Vegas looking to add another title to his growing resume.

The Ukrainian, who has captured world titles in three different weight classes, said that he’s excited to test his skills against the 23-year-old New Yorker, who comes into the bout with a perfect 15-0 record, including 12 knockouts.

But, despite Lopez targeting Lomachenko’s titles, “The Matrix” said he harbors no ill-feeling toward his opponent ahead of fight night in Las Vegas.

“Absolutely not,” he told RT Sport.

“I have a goal, I have a dream and he holds a belt, the IBF title. I need this belt and Saturday, October 17 I will try to take this belt.”

Lomachenko said he has always relished the challenge of facing the very best boxers on the planet, and says he’ll face a tough test against Lopez when they throw hands at the MGM Grand.

“When I came into professional boxing I always wanted to fight only with the top fighters, with world champions,” he said.

“Now I have a top fighter in front of me. I want only to improve who I am and to improve my legacy. 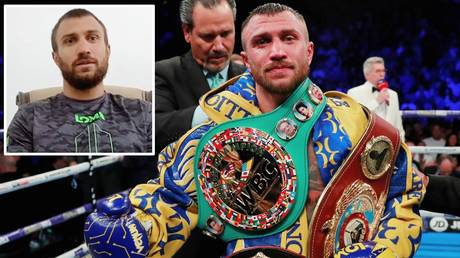