The player was embroiled in a scandal after sharing a quote wrongly attributed to Adolf Hitler, claiming that “the white Jews” secretly control the world.

The 33-year-old also praised Nation of Islam leader Louis Farrakhan – who has been declared to be anti-Semitic by the Southern Poverty Law Center – as a “powerful” figure worthy of educating the “blinded.”

Three-time Pro Bowl pick Jackson had a video call with Edward Mosberg, a survivor of the Holocaust who invited him to visit Nazi Germany’s largest concentration camp, Auschwitz, where more than one million people died.

The player shared a screenshot of his online conversation with Mosberg, 94, who was wearing his concentration camp attire.

“I grew up in Los Angeles, and never really spent time with anyone from the Jewish community and didn’t know much about their history; this has been such a powerful experience for me to learn and educate myself,” Jackson said during the call.

“I want to take the proper steps to let people know that I never intentionally had any hatred in my heart, I never wanted to put the Jewish community down, I want to educate myself more and help bridge the gaps between all different cultures,” he added.

Jackson, who apologized for his social media post, was disciplined by the Eagles and has been required to take further action to remain on the team. 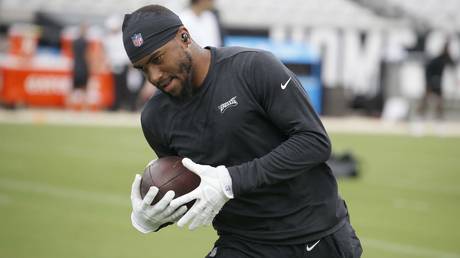