‘I want to be the Novak Djokovic of MMA’: UFC newcomer Dusko Todorovic plans to be Serbia’s latest sports star (VIDEO)

‘I want to be the Novak Djokovic of MMA’: UFC newcomer Dusko Todorovic plans to be Serbia’s latest sports star (VIDEO)

Serbia isn’t exactly known as a hotbed of mixed martial arts but that could be set to change this weekend when the unbeaten Dusko Todorovic makes his UFC debut – and he says he wants to be to MMA what Novak Djokovic is to tennis.

Todorovic’s name has long been mentioned in MMA circles as a fighter to watch after impressing on “Dana White’s Contender Series” last year and earning a first-round finish of budding UFC star Michel Pereira the year before that.

The 26-year-old will make his highly anticipated debut for the UFC on “Fight Island” this weekend against the experienced veteran Dequan Townsend and as he told RT Sport in Abu Dhabi, he hopes this will be the first step towards not only raising his own profile, but also doing the same for the sport of mixed martial arts in his homeland.

“In terms of popular fighters [in Serbia], as you said, Fedor and Mirko ‘Cro Cop’ Filipovic, they’re the biggest names there,” he said.

“Everyone knows about them but in this modern era of MMA, Aleksander Rakic fights under the Serbian flag. He has made big success in his career.

“MMA in Serbia is like everywhere in the world; it is growing, it is going up. That’s a good thing. People are becoming more aware of the sport. I feel like this victory will skyrocket that popularity in Serbia.”

Todorovic admits that mixed martial arts hasn’t really embedded itself to the sporting public in Serbia. Football has long been considered among the most-watched sports in the country, with Todorovic estimating that MMA is “probably like the 5th or 6th” most popular sport there.

He says that it has some way to go before it becomes as popular among the general public as tennis, with the country boasting the world’s top-ranked player, Novak Djokovic, as its favorite sport.

For Todorovic, though, the route to the top is easy. Emulate him.

“But I would like to be the Novak Djokovic of MMA in Serbia. That would be nice,” he announced.

“A couple of years probably,” he said when pressed on when the sport will fully take hold.

“As I said, we all know that MMA is the fastest growing sport in the world. The same case is in Serbia but there is still some prejudice and people don’t actually realize what MMA is. There are a couple of times when people ask you if you ‘train UFC,'” he says with a laugh.

“But people are coming around and slowing it’s coming up, the awareness of MMA as a sport.”

Serbia, he says, is still going through the trends which MMA has met whenever it has entered a new market, with allegations of bloodsport and “human cockfighting” rife.

“There is prejudice,” he explained.

“[The public] tend to connect it to criminals and stuff, which is totally unrelated and not true. I feel like it is journalists there who make all the wrong impressions of the sport.

“From my experience, I don’t have much energy left after my workouts to do anything else, let alone being some hooligan or criminal. It’s totally wrong to think about [MMA] like that.

“I feel like people need to change their minds about that.“ 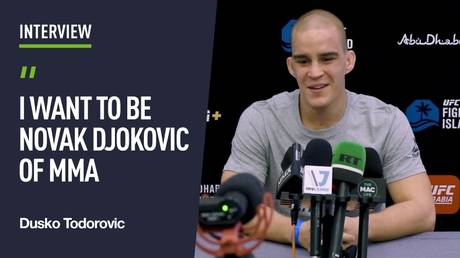 Tens of thousands of teachers on t...