A 15-year-old has revealed that a wonder goal he scored in the Ghanaian second division was inspired by PSG superstar Kylian Mbappe, with Manchester’s heavyweights already said to have made inquiries about the prodigy.

Picking the ball up on the edge of the 18-yard box, he twisted and turned around three men before forcing a helpless fourth to sit on his back.

With the goalkeeper fast approaching to protect his near post, Asante then dribbled past him before blasting into the roof of the net at a difficult angle.

Puskas contender from Mizak Asante. What a talent🥵🔥🔥🔥 pic.twitter.com/WxGIwwT1ic

His 83rd-minute screamer was enough to force penalties in a shootout that Golden Kicks won, and the youngster has since given his thoughts on his phenomenal goal.

“If you watch the goal closely, you’ll realize that when the ball first came to my left, the player I dribbled first pulled himself away from the challenge because he wanted to avoid the penalty. We already had one penalty we missed and they didn’t want to concede another,” he explained to local media.

“When I watch the video, I [can see that I] realized that the guy on my left pulled himself away. But the guy who came in for the second tackle guessed that I’ll be taking the ball back to my right, and since I had the idea he’ll take that guess, I didn’t.

“I will thank Allotei, my team mate who was on my right because after I had meandered my way through and was one-on-one with the keeper. He shouted out to me.

“Because of that, the keeper thought I was in a very tight angle, so he [the keeper] decided to cover the passing angle to Allotei so I decided to hold on to the ball and keep moving towards goal. That was why the keeper fell.”

I’ve been scoring these kind of goals all the time. pic.twitter.com/oPWWxRZZr3

“Oh, I watch a lot of players but the one I like very much is Kylian Mbappe,” he admitted. “I like how direct he is with the ball and his pace, as well. It’s Kylian Mbappe I really want to play like.”

Now said to be on the verge of a call up to the Ghana national team’s U-17s – one of his “biggest targets” and a “dream” he says he is praying for – Asante’s chairman has also reported attention from a number of European clubs including Manchester United and Manchester City.

The name on the lips of every Ghanaian football fan after his heroics over the weekend is Mizak Asante. In one moment, the 15-year-old prodigy announced himself on the national football scene.

A budding talent who sees @KMbappe as his idol. #3Sports paid him a visit. pic.twitter.com/dzc7288ycW

“Before Mizak scored this goal we had already shown his highlights – and those of other players – to clubs abroad,” said Joseph Epton to an Accra radio station.

“But he was the only player we had feedback about.

“It has come from Manchester United, Manchester City, Juventus and Genk.”

That space was too small to dribble the goalkeeper 🙆‍♂️

This is what we call Individual brilliance.
The guy is too good.

Fans on social media are already talking Asante up as a Puskas Award contender for the best goal of the year.

“That space was too small to dribble the goalkeeper,” one impressed viewer marveled.

“This is what we call individual brilliance. The guy is too good,” another purred. 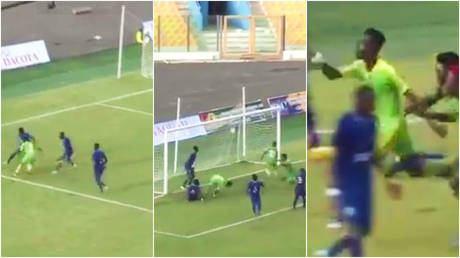 The most expensive match in footba...