Boxing legend Manny Pacquiao has announced he’s ready to “give the fans” a fight against MMA icon Conor McGregor, but only under terms that see him as co-promoter, and says has no contract with McGregor partner Audie Attar.

Pacquiao, now a Senator in his native Philippines, has announced he has taken a leaf from great rival and fellow former P4P king Floyd Mayweather in having established his own company – Pac Sports and Entertainment – and plans to command a bigger slice of the pie as a co-promoter in a potential cross-over fight.

Senator @MannyPacquiao statement (2 of 2): An exciting fight with @TheNotoriousMMA under terms and conditions where I am the co-promoter with my company. Thank you and God bless.”

“At the present time, I do not have an existing management contract with Audie Attar,” the statement read. “I have formed my own company, Pac Sports and Entertainment, and am more than willing to give the fans what they want: an exciting fight with Conor McGregor, under terms and conditions where I am the co-promoter with my company. Thank you and God bless.”

McGregor, whose only foray into boxing was against unbeaten multi-weight former world champ Mayweather in a tenth round TKO loss in 2017, said he would be fighting Pacquiao in the Middle East in a rambling series of tweets, which was then backed up by Pacquiao himself, who said he would partake to help the victims of Covid-19 in his home country.

“Anyway all water under the bridge who gives a fook. I’m boxing Manny Pacquiao next in the Middle East,” the former two-weight UFC champion said. “It will be a true honour to have faced two of the greatest boxers of the modern era, afraid of a fight.”

“For the sake of all the Filipino Covid-19 victims, Senator Manny Pacquiao will be fighting UFC superstar Conor McGregor next year,” a statement from the Senator’s office read announcing the fight.

Attar is a close business partner and member of Team McGregor and in early September he and his team announced they would be planning to deal break a fight with 41-year-old multiple weight world champion Pacquiao in Dubai. 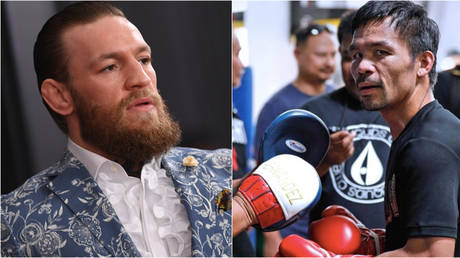