Close
Trending News
HomeSport‘I want him to QUIT’: Justin Gaethje backtracks on promise to try to ‘KILL’ Khabib Nurmagomedov as he plots KNOCKOUT at UFC 254

‘I want him to QUIT’: Justin Gaethje backtracks on promise to try to ‘KILL’ Khabib Nurmagomedov as he plots KNOCKOUT at UFC 254

‘I want him to QUIT’: Justin Gaethje backtracks on promise to try to ‘KILL’ Khabib Nurmagomedov as he plots KNOCKOUT at UFC 254

UFC interim champ Justin Gaethje has dismissed talk of lightweight king Khabib Nurmagomedov being invincible ahead of their fight next month, predicting that his confidence and lack of fear of losing will help him to a shock win.

The Russian champion will return to action for the first time in more than 13 months when the pair meet on October 24, and Gaethje has claimed that he is the superior athlete and man while talking up his chances of becoming the first fighter to beat Nurmagomedov.

Gaethje said that the air of respect between the two was not a consequence of him helping Nurmagomedov while he was making weight for a fight in 2016, adding that their meetings outside of the Octagon did not give “The Highlight” a psychological edge.

Nurmagomedov had recalled the assistance Gaethje provided him with in 2016, when he stepped in to help him out of a bath during his weight cut before he knocked out Darrell Horcher.

“I remember helping him out of the bathtub,” said Gaethje, downplaying the connection between the rivals for the undisputed title.

“It meant nothing at the time. He wasn’t in a bad spot. I happened to be there because we had the same manager [Ali Abdelaziz]. It really was nothing more than that.”

Gaethje was the underdog before his surprise win against Tony Ferguson at UFC 249 in May, and the American admitted some uncertainty over what he would do differently to Nurmagomedov’s 28 previous victims as he attempts to complete an even greater shock.

“He’s fought a lot of different guys,” he said. “My confidence is probably my biggest factor right now, paired with the power that I possess and the coach that I have [Trevor Wittman]. That’s a dangerous combination.

“I don’t care if I win or lose as long as I make my family happy and I’m proud of my performance.”

He predicted that Nurmagomedov would lose to him and proceed to fight former two-weight UFC champion Georges St-Pierre, and dismissed talk of Conor McGregor providing his own subsequent opponent before turning his ire on welterweight Colby Covington.

“I don’t even want to talk about that guy,” he seethed, accusing Covington of changing persona when the cameras started rolling during their joint attendance at a recent election rally by US president Donald Trump.

“I’m done there. I was singing his praises because of how professional he was [at the rally] and how he held himself. Then he went on to do another bunch of interviews and I probably despised that man more than anybody on planet earth.

“He is a coward. He is a fake person. As a man, I would love to slap him right across the face.” 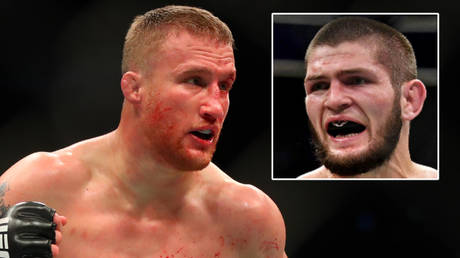