A funeral worker has received death threats online and been fired from his job after he posed for a ‘selfie’ with the body of the recently-deceased global football icon Diego Maradona.

The sick image has been circulating on social media networks and shows the funeral worker posing with Maradona’s dead body, resting one hand on the footballer’s head and giving a thumbs-up with the other.

The man was part of the team tasked with preparing Maradona’s body in advance of a private open-coffin wake for the Argentina star’s close friends and family which was due to take place on Thursday.

However, per reports online, the funeral worker has been fired from his job for an act seen by many as a gross desecration of Maradona’s corpse, while several furious fans are understood to have issued threats online after seeing the offending image.

“I want this fat baldie who took a picture of himself by Diego’s body dead,” one person wrote online. “I want him dead. DEAD.”

“He should be stripped of his Argentinian citizenship. You don’t do something like this. Complete lack of respect,” wrote another, per the Daily Mail.

After the open-coffin wake, a closed-coffin wake began at the Presidential Palace in Buenos Aires, with reports suggesting that as many as one million people will descend upon the capital to pay their respects to their country’s favorite son.

Several scuffles were also apparent as fans jostled for position to catch a glimpse of Maradona’s coffin as it was transported to lie in state.

Meanwhile, Maradona’s lawyer, Matias Morla, has claimed that Maradona was left unattended for a period of around 12 hours prior to his death and as he recovered from recent brain surgery. Furthermore, he claimed that the ambulance took half an hour to arrive – and has pledged to open an investigation into any improprieties.

“It is inexplicable that for 12 hours my friend had no attention or check-up from the personnel dedicated to these ends,” Morla said in a statement, also describing the time it took for the ambulance to arrive as “criminal idiocy“.

Morla has also promised to take legal action against the funeral worker responsible for the image, also going so far as to name the person online.

“He’s Pinier’s head of burials. [The funeral worker] is the swine that took the picture of himself alongside Maradona. For the memory of my friend I am not going to rest until he pays for this aberration,” he wrote. 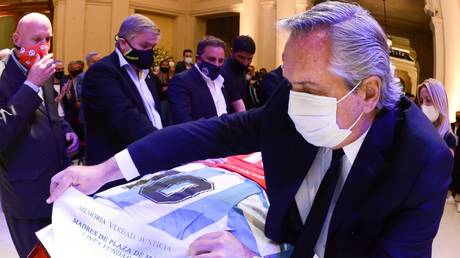