‘I want fans back’: UFC could hold CONCERTS & POOL PARTIES for fans with THREE EVENTS in a WEEK when McGregor returns in Abu Dhabi

‘I want fans back’: UFC could hold CONCERTS & POOL PARTIES for fans with THREE EVENTS in a WEEK when McGregor returns in Abu Dhabi

UFC president Dana White says he wants to “blow the f*cking doors off” with an extraordinary plan to host concerts and pool parties in Abu Dhabi in January, when he hopes fans will return as part of an International Fight Week.

Despite Covid-19 case numbers increasing across the world, White has strongly hinted that he is aiming to bring fans back for Conor McGregor’s fight against Dustin Poirier on “fight island” on January 23, hosted at the newly-opened, 18,000-capacity Etihad Arena.

White said that the festival could become International Fight Week, which was canceled in Vegas in July, and host an array of activities that have been made almost impossible by widespread public health guidelines, including live music with crowds and parties.

“What I would love to do is go there and do Saturday, Wednesday, Saturday fights,” White told Barstool Sports, revealing ambitions that sounded highly optimistic at a time when most major sporting events are still taking place without fans and no vaccine has yet been made available for the potentially deadly virus.

“Imagine all the things that people have seen all over the world with fight island. Now you’ll get the opportunity to come there, be a part of it and make it International Fight Week.

“Concerts, pool parties… and yes, I hope to bring fans back. The new Etihad Arena will be open and that was designed with us in mind.

“Everybody gets to kick around and tour around fight island and Abu Dhabi. We can get fans from all over the world there.”

The US government currently has the United Arab Emirates on the second-highest level of caution for travelers, warning would-be visitors to reconsider plans to travel to the region because of the pandemic.

UFC events on Yas Island, which have been taking place since July, have been organized with significant infrastructural and financial support from the country’s government, including backing to create stringent repeated testing for fighters as part of quarantine conditions.

“I’m ready for some fights with fans,” said White, echoing the views of millions who are missing the thrill of watching live events in person.

“I want to mingle with the fans again, I want the fans back. We’ve figured this whole thing up to now. We’ll figure out how to do this thing safely and pull this thing off in Abu Dhabi.”

Social distancing still appears to be critical to scientists’ hopes of reducing the spread of the virus for the foreseeable future, with countries including the UK observing lockdowns that have temporarily closed concert venues, swimming pools and other spaces designated as non-essential.

The cheapest and quickest flights from New York to Abu Dhabi take around 16-and-a-half hours and cost around $900, with White calling the city an “easy” and “fun” destination to reach for fans

“Everyone gets to kick around and tour around Fight Island and Abu Dhabi,” he said. “We go out there and kill it.

“It’ll be good to have fans on Fight Island. We can f*cking blow the doors off this thing.”

The arena was built as part of a development in Yas Bay spanning a million square meters, including a huge hotel luxury hotel, a pier and space for a metro transport link. 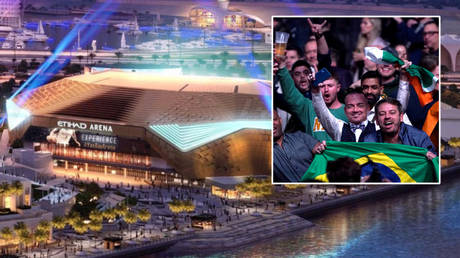