Close
Trending News
HomeSport‘I told him she was out’: UFC’s de Randamie warns referee that opponent Pena is UNCONCIOUS after brutal guillotine (VIDEO)

‘I told him she was out’: UFC’s de Randamie warns referee that opponent Pena is UNCONCIOUS after brutal guillotine (VIDEO)

‘I told him she was out’: UFC’s de Randamie warns referee that opponent Pena is UNCONCIOUS after brutal guillotine (VIDEO)

Dutch ‘Iron Lady’ Germaine de Randamie is famed for her kickboxing but it was the UFC star’s brutal submission skills which were on full display as she picked up a Performance of the Night bonus on Fight Island.

The 36-year-old former UFC featherweight queen faced off against Julianna Pena in Abu Dhabi and it was ‘The Venezuelan Vixen’ who found herself unconscious by the end of the contest.

Midway through the third minute of the third round of their entertaining bantamweight bout, de Randamie locked in a tight guillotine to put her rival is serious trouble.

“Oh, guillotine. That looks tight, that looks very tight… I think she’s going to get it,” commentator Dan Hardy screamed.

“I think she’s out, I think she might be out. Is she unconscious? She’s out.”

Referee Jason Herzog tugged on Pena’s flaccid arm before calling off the fight, then rolling the fighter’s limp body over so that she was on her back.

De Randamie rose in celebration, making a ‘shush’ gesture as the referee continued to check on her stricken rival.

The Dutchwoman earned a $50,000 ‘Performance of the Night’ bonus for what was the first submission victory of her 14-fight professional career.

The win saw her bounce back from a bantamweight title defeat to the all-conquering Amanda Nunes in December, and could set up a title eliminator with Holly Holm, who won her bantamweight main event contest against Irene Aldana on the same night on Fight Island via unanimous decision.

“That’s definitely an option,” Holm said after she defeated Aldana. “I think everybody probably thought her and I might meet up again in there, so we’ll see what happens. We’ll see where it goes from here.”

De Randamie, however, seems set on another direct shot at Nunes.

“I tell everybody if you give me your neck, I’ll put you to sleep,” she said.

“I can only say still the No. 1 [contender]. Hold that belt, champ. Congratulations with your beautiful family. But I’m not done. ‘The Iron Lady’ is here.”

She added at the post-fight press conference: “I told [the referee] twice that she’s out… because I felt her getting weak.

“This was the first time [I’ve put someone to sleep using this choke], and the best one.”

Thinking about whether she faces Nunes or not, de Randamie added: “I deserve a little bit more respect for the things I’ve done in my career… give me an entertaining fight, even if it’s not a title fight…”

Pena, meanwhile, saw her run at a potential title shot come to a halt with only her second defeat in her past seven octagon outings. 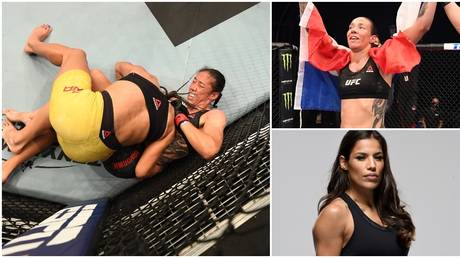