Tennis star Yulia Putintseva took out her French Open frustrations on her racket on Wednesday after she crashed out at Roland Garros after suffering a third-set collapse in her match with unseeded Argentine Nadia Podoroska.

No. 23 seed Putintseva was defeated by two sets to one (6-3, 1-6, 6-2) early on Wednesday by the unheralded Podoroska, eliminating her from the tournament in which she has twice been a quarter-finalist, and it was clear that she was unhappy with her performance.

At one particularly contentious moment in the match, Putintseva could no longer restrain her emotions as she furiously slammed her racket six times into the clay court in front of a shocked, socially-distant audience, leaving her racket a mangled mess before flinging it towards the sideline.

I think Putintseva is a bit angry pic.twitter.com/FjBacQsuX7

Putintseva had been considered something of a dark horse heading into the tournament and was considered a candidate to repeat or improve on her 2018 quarter-final appearance. Now she will have to watch the remainder of the competition on television.

The Kazakh player, who is of Russian descent, started slowly and dropped the first set to Podoroska by a score of 6-3 but rallied in the second to rout her opponent 6-1.

With many observers thinking that the third set would be something of a formality for the experienced Putinsteva, she instead ceded momentum to her opponent and could only manage to win two games in the final stanza, a below-par tally clearly prompted her on-court outburst of emotion.

23 year-old Nadia Podoroska reaches the Roland Garros R3 in her first slam main draw with a win over US Open QFist Yulia Putintseva.

Podoroska’s victory is the latest in what has been a tremendous year for her career thus far. She is now 40-6 in her matches this year for an 87% winning percentage and has risen to the 130 mark in the world rankings despite languishing outside the top 300 12 months ago.

And her potential route throughout the rest of the tournament may be made somewhat easier after it was revealed on Wednesday afternoon that Serena Williams, three-time winner of the French Open, has been forced to withdraw from the competition citing an Achilles injury.

Podoroska will now face Slovakia’s Anna Karolina Schmiedlova in the third round on Friday. 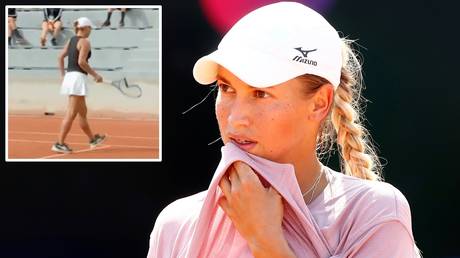