UFC president Dana White has agains stoked rumors that Khabib Nurmagomedov could return to the Octagon for one final fight, telling the media on Tuesday that he believes the Russian’s reign as lightweight champion isn’t over yet.

Nurmagomedov surprised even his closest training partners when he announced his retirement in the cage following his resounding defeat of Justin Gaethje on “UFC Fight Island” last month, telling UFC commentator Jon Anik that he had given his word to his mother that he would not continue his career outside the influence of his late father and coach, Abdulmanap.

But if there’s one thing mixed martial arts, and combat sports in general, has taught us it is that retirements are often a temporary thing (Conor McGregor currently has three of them) and this has given White hope that one of this most prized assets could still return for one final tussle before he walks into the sunset.

“I told you guys that I think he’s gonna go to [30-0],” McGregor told the assembled media following a taping of “Dana White Contender Series” in the UFC Apex facility in Las Vegas late Tuesday.

Dana White believes Khabib Nurmagomedov will fight again, and says the plan is for Conor McGregor to fight Dustin Poirier in Abu Dhabi.

Naturally, questions will be asked as to why White has come to this conclusion after the famously stoic Russian champion’s dramatic and emotional in-cage exit from the sport.

But he says that he has been given hope by the face that Nurmagomedov has yet to withdraw from the USADA testing program – a hint, perhaps, that Khabib isn’t quite ready to call time on his record-breaking career just yet.

“If he’s still testing, why the hell would you want to test if you’re not gonna fight?” White asked.

Still though, and before Nurmagomedov’s legion of fans get too excited, White said that he hasn’t received any definitive word on Khabib’s future.

“He hasn’t committed, but I feel like he’s gonna,” he explained.

“I’m not really pushing him. We talked about it and he just fought. Let him take some time, spend some time with his family, spend the holidays. There’s no rush.”

Regardless, White is clearly giving Nurmagomedov time to consider his next move – as evidenced by his unwillingness to remove the UFC’s 155-pound title from around Khabib’s waist.

Soon after Khabib’s retirement announcement, speculation turned immediately to the belt, or rather its next destination.

The proposed upcoming January fight between Conor McGregor and Dustin Poirier had been mooted as a potential candidate to crown a new champion – but White moved to assure the media that Nurmagomedov is now, and will be for the foreseeable future, the UFC’s lightweight champion.

“No, [it won’t be for the title],” White said of the still-to-be-confirmed McGregor-Poirier fight. 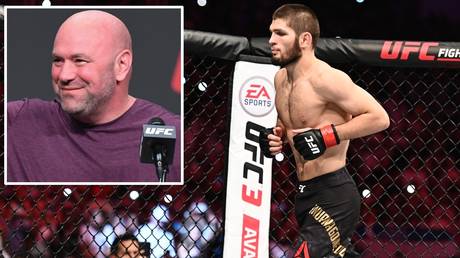 'Ronaldo and Neymar left and...

Philips’ Wake-Up Alarm Clock is no...