Close
Trending News
HomeSport‘I tend to my farm’: Russian champ Khabib SHOOTS DOWN Dana White’s hopes by admitting he has NO INTEREST in UFC return

‘I tend to my farm’: Russian champ Khabib SHOOTS DOWN Dana White’s hopes by admitting he has NO INTEREST in UFC return

‘I tend to my farm’: Russian champ Khabib SHOOTS DOWN Dana White’s hopes by admitting he has NO INTEREST in UFC return

Khabib Nurmagomedov has revealed that he has no plans to return to action, preferring to concentrate on his economics qualification and farming investments in a blow to UFC boss Dana White’s hopes of the star making a comeback.

Less than 24 hours after promotion president White had discussed his return as a formality, the retired Russian lightweight champion revealed that he is focused on completing his qualification at the Plekhanov Russian University of Economics and furthering his agricultural interests.

White had told reporters that the sport’s star figure was still carrying out drug testing required of active fighters, retaining the lightweight title he defended in resounding fashion against Justin Gaethje on “fight island” in Abu Dhabi last month.

“Khabib’s going to fight,” he insisted, while explaining part of the reason why January’s fight between former champions Conor McGregor and Dustin Poirier will not be for a belt. “I believe he’s going to fight.”

That now seems a distant prospect after Khabib reportedly spoke about his plans for “the next five years” while answering questions from a group of young people about his future.

“You can fight until you’re 40 but there should be a goal,” he said.

“I had a goal to reach the summit and I got there. Further, I have no competitive interest.

“Next year I will graduate. I’d like to [build on] my thesis, do a masters course, dedicate more time to studying.

“I’ve bought sheep, I tend to my farm. I’d like to develop in this field a little. I have the bull calves out to feed, I have cows.”

Despite Nurmagomedov’s indifference to public relations stunts and the emotional announcement that he had ended his career immediately after beating Gaethje, rumors have been rife that his withdrawal from the sport would be a temporary measure of the kind observed by fighters such as McGregor.

At 32, Nurmagomedov could have years left in the sport – but the tragic passing of his father, mentor and coach, Abdulmanap, earlier this year has added to the sense that he has little appetite for continuing his all-conquering UFC reign.

The businessman launched his eponymous new mobile virtual network operator on Wednesday and also stars in his own life coaching course on an online campus, among his array of new projects.

He has been at the center of political rows in recent weeks, including a public debate over whether “The Eagle” should be given the highest honor in Russia and a war of words over his furious social media outbursts against French president Emmanuel Macron.

“I would like to take part in a place where I can bring a benefit,” Nurmagomedov told his audience in his homeland of Dagestan.

“It doesn’t have to be big politics. Right now I can bring a benefit without being a politician, and that’s enough for me.” 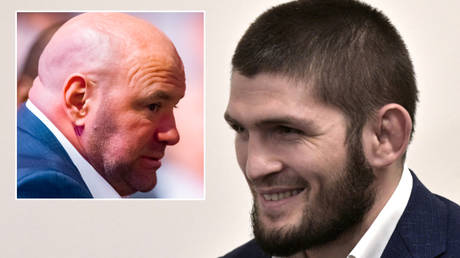