Close
Trending News
HomeSport‘I still get called a pikey t**t’: Tyson Fury reveals he is a regular victim of RACISM for his Traveling background

‘I still get called a pikey t**t’: Tyson Fury reveals he is a regular victim of RACISM for his Traveling background

‘I still get called a pikey t**t’: Tyson Fury reveals he is a regular victim of RACISM for his Traveling background

WBC heavyweight champion of the world Tyson Fury may be an internationally-renowned boxing superstar, but that hasn’t prevented him from being discriminated against because of his Traveling background.

Before he earned fame and fortune as arguably the best heavyweight on the planet, Fury used to live in a caravan on his father John’s land as part of a Traveler family. And the boxing colossus says that his status as world champion hasn’t changed the fact that he suffers abuse.

Speaking to Piers Morgan on Good Morning Britain, Fury stated, “I am a white male and I suffered racism in 2020 as a white person, coming from a Traveling background.

“Even today you can go into pubs and you can see signs saying, ‘No Travelers or gypsies allowed’.

“It’s still acceptable to be racist towards Travelers. No one says anything, it’s just accepted.

“It’s terrible because you tar everyone with the same brush and to have such things go on in my life, to see that on doors and whatever, to be refused as a person, it was like, ‘What?'”

And, in a situation eerily similar to one suffered by a former heavyweight champion Muhammad Ali (then known as Cassius Clay) 60 years ago in the US, Fury revealed that he was refused service in a restaurant because of his heritage.

“Me and Paris went to go in a restaurant and they said ‘No gypsies allowed,'” Fury explained.

“I said, ‘I’m a heavyweight champion of the world representing this country’.

Abuse and discrimination for his background is nothing new for Fury, who said he still gets branded a “pikey” today.

The fighter, who proudly represents his background via his fighting moniker “The Gypsy King,” told UK newspaper The Daily Star, “I’ve suffered from racial abuse my whole life, even now I still get called a ‘pikey t**t’ when I drive down the road.

“I can be jogging down the road and people shout out of their car window, ‘You bloody pikey!’ Then they just drive on.

“I don’t care, it’s just a part of life. I suffer with it all the time, always have done, always will do, sticks and stones will break my bones but names will never hurt me.

“People will say, ‘Why don’t you stand up for equality for your own race of people?’

Fury is currently preparing for a third fight with former WBC champion Deontay Wilder, who he stopped in their second meeting following a controversial draw in their first meeting.

Fury is also expected to face fellow countryman and holder of the other world heavyweight championship belts, Anthony Joshua, in 2021 in what could potentially be the biggest heavyweight title fight in a generation. 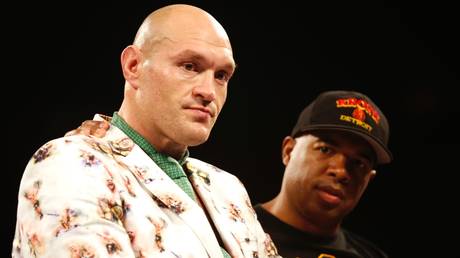