UFC women’s flyweight contender Ariane ‘Queen of Violence’ Lipski has listed off a grisly series of facial injuries she suffered in her second-round defeat to Antonina Shevchenko at last weekend’s UFC 255 event in Las Vegas.

It was a good day for the Shevchenko sisters on Saturday, as flyweight queen Valentina defended her world title with a clear-cut unanimous decision win against Jennifer Maia but it was elder sister Antonina who perhaps left the biggest impression, as she inflicted tremendous damage on opponent Lipski en route to a second-round TKO win – and the defeated Brazilian has since taken to social media to detail the physical toll she paid in the fight.

Lipski, the former KSW flyweight champ, was second best throughout the fight as the relentless Shevchenko returned to winning ways after a loss to Katlyn Chookagian in May, unleashing brutal ground and pound on the 26-year-old Brazilian and leaving her with a laundry list of injuries.

“During the fight, everything is very intense and fast, I made some bad decisions which paid its toll; and I lost,” Lipski wrote on social media alongside an image of her badly bruised face.

“Yesterday, at the second round, while I was under my opponent, she hit me with her elbow on my left eye and and felt my face going numb right away, my vision went blurred and unfocused and suddenly, everything was so painful.

“I could only think of protecting my left eye, hoping the pain would go away and I would get back to the fight; but I ran out of time.”

In addition to the sting of defeat, Lipski revealed that she suffered numerous facial injuries in the fight which will likely keep her on the sidelines for an extended period of time – the toll she says she must pay for her nine or so minutes in the cage with Shevchenko.

“I have a fracture in one of the bones of my face and, therefore, I still can’t feel my nose nor the left side of my lips/mouth; it’s painful to move my left eye and I still need to stay for observation, but I’m already taking all the medicines necessary,” she wrote.

But if Lipski will be left to lick her wounds after her defeat, the Shevchenko sisters emerged from their fights almost unscathed. A picture posted to Instagram by Valentina showed her alongside her sister, with slight bruising around Antonina’s left eye the only real evidence that either woman had just competed in a professional prizefight – or as she put it, their “after fight makeup and hairstyle made by UFC 255.” 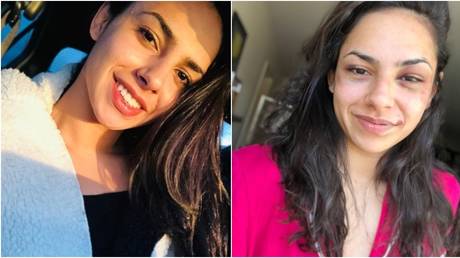