Close
Trending News
HomeSport‘I sparred a couple of times, then picked up $10 million’: Mayweather says he was OVERWEIGHT for exhibition vs Japanese kickboxer

‘I sparred a couple of times, then picked up $10 million’: Mayweather says he was OVERWEIGHT for exhibition vs Japanese kickboxer

‘I sparred a couple of times, then picked up $10 million’: Mayweather says he was OVERWEIGHT for exhibition vs Japanese kickboxer

Boxing great Floyd Mayweather has revealed that he was out of shape and overweight for his 2018 exhibition match with Japanese kickboxer Tenshin Nasukawa in which the undefeated boxer earned more than $3 million per minute.

Mayweather dropped the then 20-year-old Nasukawa three times in the opening round before his corner mercifully threw in the towel to call a halt to the fight which earned Mayweather a reported payday of more than $10 million but despite it being one of the more lucrative nights of the undefeated great’s career, he says that he did next to no preparation for it.

The exhibition has been plagued by rumors of match-fixing in the years which followed but Mayweather has rejected those suggestions, saying that it wasn’t fixed – and that he was told by the the fight’s Japanese to promoters to “really go at it” against boxing novice Nasukawa.

“Well, they told me in Japan. I was going to go over there. Just move around with the guy. Take it lightly,” Mayweather told the Club Shay Shay podcast, World Boxing News reported.

“I would go to the gym and spar a couple of times, and then I went to Japan and picked up nine or 10 million.”

Mayweather’s assertion that he was told to come into the fight aggressively contrasts the actual opening exchanges of the fight. The world champion boxer began slowly but with a smile beaming across his face as he pawed out playful jabs towards Nasukawa.

The dropped the Japanese to the canvas for the first time just 70 seconds into the fight with a left hook, right body shot combo which sent Nasukawa sprawling to the canvas.

It was the beginning of the end. Mayweather upped the tempo from the point, felling Nasukawa on two more occasions before his corner decided that their fight had taken enough damage.

Mayweather has publicly remained open to further exhibition bouts, namechecking both Conor McGregor and Khabib Nurmagomedov as potential candidates for fights which he says could earn him north of $300 million.

He has previously stated on social media that he intends to “come out of retirement in 2020” but so far no concrete plans have been announced to that end. 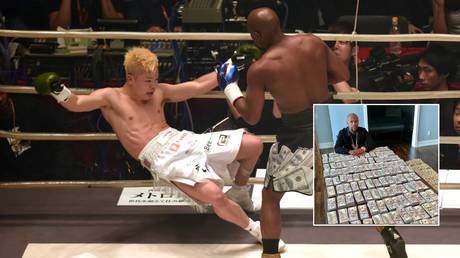