Close
Trending News
HomeSport‘I remember him first as a father and then a coach’: WATCH touching video of Khabib recalling childhood with late father to kids

‘I remember him first as a father and then a coach’: WATCH touching video of Khabib recalling childhood with late father to kids

‘I remember him first as a father and then a coach’: WATCH touching video of Khabib recalling childhood with late father to kids

This is the heartbreaking moment Khabib Nurmagomedov told Moscow schoolchildren of the “huge” role his father and trainer Abdulmanap Nurmagomedov had played in his life, just months before the latter’s death from Covid-19.

In November, RT Sport cameras were on hand to capture UFC lightweight champion Khabib telling kids at a Moscow school about his family life before UFC Fight Night 163 in the city, speaking of his relationship with his father and trainer Abdulmanap, who died on Friday aged 57 due to complications from coronavirus infection.

When one youngster asked the 28-0 fighter about the role of his father in his life, Khabib fondly remembered his dad as a “father first, coach second” and spoke of mutual understanding thanks through the presence of his own children.

“My dad is also my trainer. I remember him first and foremost as a father but he also played a huge part in my life as a coach,” the 31-year-old said.

“I don’t think it was easy for him to raise me as a fighter and as a son. I think it was very  difficult, I myself am a father, I have a son. I understand just about what he feels to me. He played a really big role in my life and still continues to be my trainer, and of course my father.

“Family plays a big part in my life, I always put them ahead of everything. I don’t see anything more important in this life than family. I think we should always put them first.”

Abdulmanap was recognized throughout the world as one of the game’s best coaches and had trained Khabib from childhood in his family’s basement gym to some of the biggest fights in MMA history.

The elder Nurmagomedov died from complications of Covid-19 in the Moscow military hospital where he was being treated, having never recovered from brain damage brought on by a heart attack and stroke due to infection with the deadly disease.

He was twice entered into a medically-induced coma following emergency heart bypass surgery, and although he woke second time around and his condition was described as ‘serious but stable’, he finally lost his battle to regain his health. 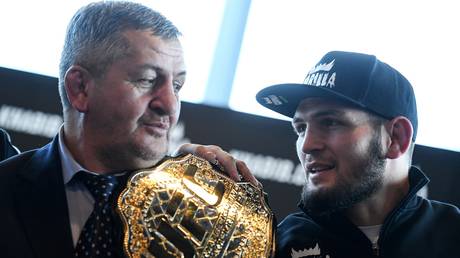 ‘He was getting better. I just can...