Close
Trending News
HomeSport‘I promise I won’t break anything on you’: UFC champ Jon Jones vows not to damage Mike Tyson if they ever fought in the octagon

‘I promise I won’t break anything on you’: UFC champ Jon Jones vows not to damage Mike Tyson if they ever fought in the octagon

‘I promise I won’t break anything on you’: UFC champ Jon Jones vows not to damage Mike Tyson if they ever fought in the octagon

Jon Jones has responded to Mike Tyson’s comments about fighter pay, and answered the boxing legend’s statement that he’d have to face him to make $100m from a fight.

Jones and the UFC have been at loggerheads over fighter pay, with Jones suggesting that he’d relinquish his UFC 205-pound title and walk away from the sport if they couldn’t come to an amicable agreement over renumeration.

READ MORE: Jon Jones demands to be RELEASED from UFC contract as he brands Dana White ‘a f*cking liar’ in bitter pay dispute

Jones had suggested he’d be interested in moving up to heavyweight to fight terrifying knockout artist and top contender Francis Ngannou, but the idea was shot down by the UFC, with Jones going public on the matter, sparking a public back-and-forth with the UFC.

Speaking in an Instagram live (shared via Fight Hype), Tyson offered his take on the situation as he explained that, despite the UFC’s burgeoning popularity, its athletes would never earn as much as their equivalent boxing counterparts.

“Listen to this,” Tyson began.

“UFC is more popular than boxing, right? Higher ratings, right? But a UFC fighter will never be richer than a first-class (boxer).

“To make $100m, Conor (McGregor) had to fight Floyd (Mayweather). Jon Jones got to fight me if he wants to make some super money.”

Jones, who has remained active on social media throughout the lockdown, initially tweeted his acknowledgment of Tyson’s comments with a simple one-line tweet, saying, “I’m listening, @MikeTyson.”

Jones then took that tweet and created an Instagram graphic, which he posted to send a further message to “Iron Mike” as he floated the idea of the pair facing off in both boxing and MMA matchups.

And the all-conquering UFC light heavyweight champion and pound-for-pound star cheekily promised Tyson that he wouldn’t leave the 53-year-old boxing legend with any broken bones if they meet inside the octagon.

“I’ll box you in the ring if you promise to give me a real fight in the octagon afterwards,” he said.

“And because I respect you so much, I promise I won’t break anything on you.” 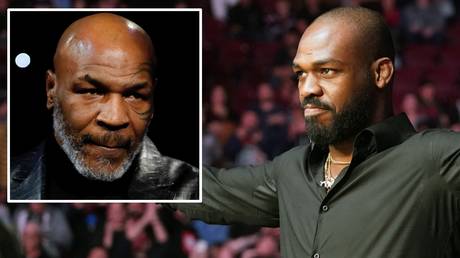