‘I pray he somehow finds help’: Troubled NFL ace who was shamed by Covid breaches & car crash is savaged after quitting on Twitter

‘I pray he somehow finds help’: Troubled NFL ace who was shamed by Covid breaches & car crash is savaged after quitting on Twitter

Isaiah Wilson has been blasted as one of the worst first-round picks in NFL history after swiftly deleting a tweet claiming he was “done” with Tennessee Titans, coming after a series of run-ins with the law and two Covid breaches.

Despite being the 29th overall pick at the start of the 2020 season, troubled Wilson had a campaign to forget and was put on the Non-Football Injury list in December after finding himself on the Covid-19 list twice for breaching safety rules.

The 22-year-old offensive tackle was involved in a bizarre incident when Tennessee State University police found him at an off-campus party during a Titans training camp.

The police report showed that Wilson had appeared to consider jumping from a second-floor balcony and had been slapped with a trespass warning, testing the Titans’ patience before another shameful episode in September.

Get rid of this bum. Even if you cut him, screw it. Let the Seahawks have him for a bucket of fish

Wilson was arrested and charged with driving under the influence after losing control of his vehicle and striking a concrete wall, making his employers look foolish in the light of their claims that they had carefully assessed his character before handing him a four-year, $11.6 million contract.

That deal could soon be in tatters after Wilson unwisely tweeted that he was “done with football as a Titan” late on Monday, drawing dismay and wrath from fans over the rapidly-removed insight into his current mindset.

“There’s no other way to say it than Isaiah Wilson will go down as one of the worst draft picks in NFL history,” said Titans reporter Steve Layman.

Good luck trading him. 2020 1st rounder at a desirable position, yes. But he only went in 1st rnd cuz of low pop in draft at O line. Add in 3 snaps all year due to multiple Covid violations, a susp, a college party, a New Years party, oh and being arrested for a DUI.

“Trade”……… they couldn’t trade that dude for me right now! pic.twitter.com/vF0CLGyPUY

Who in their right mind would want him?

“As a human, I pray he somehow finds some help, figures out what’s important to him and lives a productive life with or without ball.”

General manager Jon Robinson told the media that Wilson had not been “the player we evaluated”.

“We put him on the [list] and haven’t spoken to him since,” he admitted.

I wouldn’t trade a 14 year old can of mustard sardines for his ass.

I’m sure teams will be tripping over themselves to pick him up pic.twitter.com/k2xzDf2thG

As someone who covers the #Titans there’s no other way to say it than Isaiah Wilson will go down as one of the worst draft picks in NFL history.

As a human I pray he somehow finds some help, figures out what’s important to him and lives a productive life with or without ball.

“He’s going to have to make a determination on whether he wants to do what it takes to play pro football. That will be on him.

“I know what the expectation level is here and it’s no different than any other player on the football team.

“We have a certain standard that we want players to prepare and perform at professionally and as people – and there’s a lot of work to be done there.” 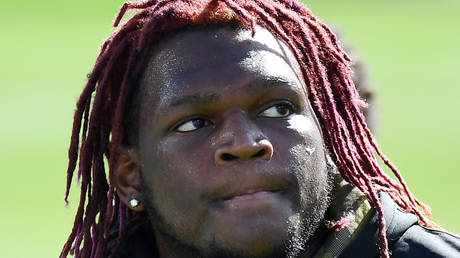