An NFL quarterback has taken aim at “woke cancel culture” that “shrinks people” after an explosive exchange with rival fans, warning that society is in danger of becoming too soft.

In his 22nd win out of 27 encounters with the Chicago Bears on Sunday, Green Bay star Aaron Rodgers was seen stoking the atmosphere by loudly telling opposition supporters that “I still own you”.

The taunt during the 24-14 win proved divisive, with some labeling Rodgers “classless” and others praising the 37-year-old for his bravery and sense of showmanship.

Rodgers won backers on a popular American football show, with host Pat McAfee praising him for avoiding the cliche-ridden wholesomeness he said he often sees among quarterbacks in preference for an altogether less bland response.

When #Packers QB Aaron Rodgers was asked postgame about his “I still own you!” comments to the #Bears crowd, he said: “Sometimes you black out on the field… I looked up in the stands and all I saw was a woman giving me the double bird”

Well – there were many of them. pic.twitter.com/hFMD7cvhwO

“There is this culture that exists – that gets off, I think, on shrinking people, keeping them small, keeping them in a box, quieting them through cancelization or demeaning comments,” former Super Bowl champion Rodgers told the show.

“I also exist outside of that in different realm where I do feel confident in things I say and I do stand by what I do.

“I like to speak the truth and I’m not part of this woke cancel culture that gets off on trying to silence people all the time.”

Aaron Rodgers telling bears fans “I still own you” and then sitting like this after the touchdown has made my entire year. pic.twitter.com/Yi8HnGDmkW

Did Aaron Rodgers just say “I own you” to the crowd? That’s disgusting. How do we let kids watch this? Do something @nfl

Athletes are often pilloried online for showing partisan feelings during games. “If you don’t like it, that’s fine,” said Rodgers, pointing out that his excellent record against the Bears justified his mid-match bravado. “It’s your prerogative.”

“I didn’t plan on telling the crowd I owned them. I think, based on my career win percentage down there against them, our teams have definitely done some good things. I know I used ‘I’ a few times, but I really think it’s a ‘we’ thing.”

The veteran is thought to have responded to a fan who flipped him the bird from the sidelines.

Am being told the accurate quote to the Bears fans was this:
“I’ve owned you all my f-ing life! I own you, I still own you.”#AaronRodgers
Extra savage.

“I know he’s a great quarterback, but I guess he’s now a shareholder of the Bears.”@TomBrady really congratulated Aaron Rodgers 🤣

“Are we getting that soft, as a society, where we can’t have a back and forth now?” asked Rodgers.

“Somebody can pay for a ticket and  say whatever the hell they want – which they should be able to.

“That’s fine, but the one time I say something back to them – now I’ve disrespected an entire city and my own organization.” 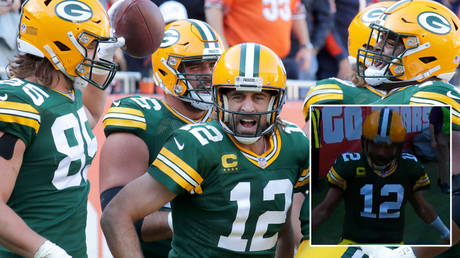