Russian heavyweight Murat Gassiev has admitted to having a “very difficult” time and set his sights on another bout within three months after destroying Michael Wallisch in Moscow, fighting for only the second time in three years.

Heavy-hitting Gassiev has suffered from a lack of activity since losing his unbeaten record via a decision defeat to Ukraine’s Oleksandr Usyk in 2018, with injuries and promotional issues keeping him out of the ring.

A first-round demolition of Nuri Seferi in October had been Gassiev’s first fight since moving up from cruiserweight, and he impressed again to knock out Wallisch in the fourth round, winning the WBA Asian championship.

“It was a very difficult three years for me,” said Gassiev, who floored Wallisch with a body shot and overhand right before stopping him.

Murat Gassiev (28-1, 21 KO’s) scores a knockdown in the 4th and then forces the TKO-4 stoppage seconds later over Michael Wallisch (22-5) in their heavyweight bout for the vacant WBA Asia heavyweight title in Moscow pic.twitter.com/FtbPRJP30r

Gassiev could have won that in any round he chose #boxing

“I want to say thank you to everyone who did not turn away from me. Thank you very much to the Russian Boxing Federation and my promoter, Vladimir Hryunov, for giving me the opportunity to box and return to optimal shape.

“Today I fought a real heavyweight, with long arms and large dimensions. We are moving in the right direction.”

Gassiev and Usyk had each held two cruiserweight world championships when they met in the World Boxing Super Series final.

Usyk is now set to challenge Anthony Joshua for his heavyweight crown in London on on September 25, and Hryunov confirmed that Gassiev wants to return “in two or three months.”

“For now, I need to remember how to box well,” admitted Gassiev.

“I need to return to my previous level, get better and achieve big goals – to become the world heavyweight champion.” 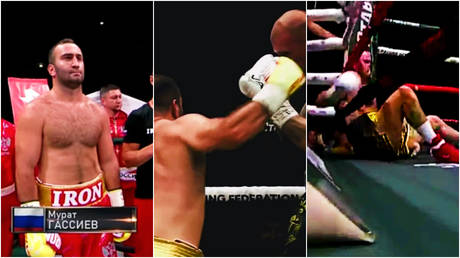