‘I need to play my best’: Rafael Nadal says he’ll have to summon his BEST FORM to defeat Novak Djokovic in French Open final

‘I need to play my best’: Rafael Nadal says he’ll have to summon his BEST FORM to defeat Novak Djokovic in French Open final

Nadal has been the world’s top clay-court player for more than a decade, including two French Open final victories and four other Roland Garros wins over Djokovic, but says that nothing less than his very best play will be enough to stop the in-form Serb in Sunday’s final.

“Different circumstances, different kind of tournament and different situation,” Nadal told reporters ahead of the final.

“I can’t predict the future… The only thing I know is to play against Novak, I need to play my best. Without playing my best tennis, the situation is very difficult.”

Nadal has an unmatched record of success on court Philippe Chatrier, but warned those who assumed that would give him the edge that Djokovic’s current form has been nothing short of outstanding, including his previous showings at Roland Garros.

“I know that is a court that I have been playing well for such a long time, so that helps,” he said.

“But at the same time he has an amazing record here, too, being in the final rounds almost every single time.

“He is one of the toughest opponents possible. But I am here to keep trying my best. I like to play in this scenario. I know I have to make a step forward. I think I did one today.”

Nadal booked his place in the final by defeating Diego Schwartzman, who knocked him out of the Italian Open prior to the tournament at Roland Garros, and said that he had to play “with a plan, with the right determination” and “tactically the right match”.

But, despite his tactical success in the semifinals, he said he’ll have kick things up a gear to defeat Djokovic in the final.

“For Sunday it’s not enough. I need to make another step forward. That’s what I’m looking for,” he said.

“I am going to work hard to try to make that happen.” 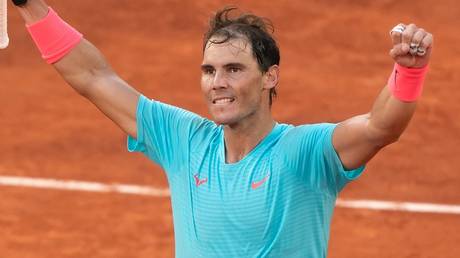