Dina Averina, the gymnastics sensation at the center of an Olympic gold medal decision that led to accusations of politically-motivated bias against Russia, has spoken of her pain and insisted that she just wants answers.

The highly contentious judging decision, which stunned many and caused Russian national team head coach Irina Viner-Usmanova to tell RT that the incident was the “same thing as doping or bribing the judges”, has been the subject of ample debate since Israel’s Linoy Ashram sensationally claimed rhythmic gymnastics gold in Tokyo earlier this month.

In arguably the most surprise result of the century in rhythmic gymnastics, Russia failed to take gold for the first time in five Olympic Games, landing Ashram victory despite the Olympic newcomer dropping her ribbon while Averina made no mistakes on that scale during a stylish performance.

“The main thing is that I didn’t lose the apparatus and didn’t make any gross mistakes,” a still-reeling Averina told Match TV, having looked shaken on the podium as the controversial scores came in on the day.

“I don’t need this gold medal. I need the truth so that the Russian gymnasts will be honestly judged in the future.”

Anguished Averina has voiced the same concerns for the wider sport as former champion Karolina Sevastyanova, who was clearly frustrated for the 23-year-old and asked whether there is any point in athletes training in the knowledge that their rivals can beat them even if they drop the ribbon.

“This Olympics just destroyed the future of sports,” Sevastyanova blasted. “Now anyone, in any form, who will perform poorly, can claim first place and say that now everything is permissible.”

The judges on the day included three Japanese judges, a superior jury and a central team of individual assessors from 12 countries including Ukraine, Hungary, Poland, Uzbekistan and Georgia.

“I don’t know why the judges took so long to give marks,” said Averina, who has only rerun excerpts of the footage. “I don’t want to experience these emotions again.

“I cried when I reviewed these moments. My mark? I didn’t understand the refereeing at the Games, so I can’t judge them.”

Elite judge Lidia Vynogradna partly defended the scoring by claiming that Ashram had amassed a huge lead by the time she blundered, with the Ukrainian adding that she had received death threats for giving her expert view.

Vynogradna said the Ukrainian judge in the final, Natalia Ieromina, had received “the biggest hatred”, which she said was unfounded because her nationality did not mean the panel would be “automatically biased” against Russia.

Ashram and her coach, Ayelet Zussman, have preferred to bask in their glory rather than discuss the judging, with Averina absolving the champion from blame in the saga and even suggesting that she had sympathy for her over a win which has been branded unjust by its critics.

Boris Paikin, the chairman of the State Duma Committee on Physical Culture, Sports, Tourism and Youth Affairs, was among them, saying Averina had “fallen victim to political games.” 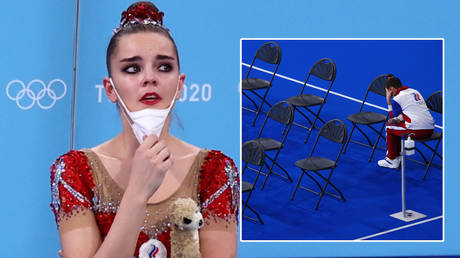 Queen’s portrait was ordered to be...

‘Wilder got robbed of a KO’: Boxing fans accuse referee of ‘crazy slow’ count after Fury was dropped