‘I made more money on Dancing with Stars than in ALL my fights combined’: Paige VanZant eyes free agency as UFC deal nears end

‘I made more money on Dancing with Stars than in ALL my fights combined’: Paige VanZant eyes free agency as UFC deal nears end

Paige VanZant looks set to become the latest high-profile free agent in MMA after the flyweight fighter added her voice to growing discontent about fighter pay, suggesting she earns more through endorsements than via the UFC.

VanZant is scheduled to face Amanda Ribas at UFC 251 on ‘Fight Island’ next month but the appearance could well be the last of her six-year UFC tenure after she announced to ESPN that she would allow her contract to expire in a bid to gauge her worth on the open market.

“I have my heart set and nobody is going to change my mind that I’m fighting my contract out,” she told Ariel Helwani. “ don’t know where my future lies – I truly don’t. I think that’s kind of an exciting thing in my life.

“I’ve been with the UFC for six years now, and through this time I’m still – which is crazy – on the same contract before I fought Rose (Namajunas) at 22 years old, and I’m 26 now.”

Despite not exactly setting the world alight with her latest performances in the cage, VanZant has cultivated her personality outside of it significantly. She has appeared in the famed Sports Illustrated swimsuit issue, as well as being beamed into millions of living rooms each week as a contestant on the fiercely popular television series Dancing with the Stars.

VanZant’s issue with her employer stems from her belief that her contract in the UFC hasn’t grown at the same rate that her fame has outside of it.

“So somehow, through injury, being on ‘Dancing with the Stars,’ being on TV, work I’ve done throughout all of this, I’ve been on the exact same contract since I was 22,” she explained.

“That’s the contract I signed since I was 22. But I just feel like a regular extension isn’t what I want. I want to prove my worth and my value and I want a brand new contract.

“I’m really excited to get the opportunity and really test the free agency because how do you know what your value is unless you can go test it among the other sharks?”

Her 2.5 million Instagram followers have opened up a range of new financial options for VanZant, something she says gives her more leverage in negotiations. If the deal isn’t up to her standards, she says she is in the position to walk.

“So I make $46,000 (to fight) and (another) $46,000 (to win),” VanZant said. “I’m not going to hide that because everyone knows. I can make way more money than that just promoting brands on Instagram, and that should say something.

“Why would I step away from all the amazing success that I have? I made more money on ‘Dancing with the Stars’ than I have in my entire UFC career combined – every fight, every win, every bonus. I love fighting. It’s what I love to do, and for this fight I dropped every single sponsor. I haven’t posted anything on Instagram. Nothing matters to me except this fight and it’s a clean slate for me.” 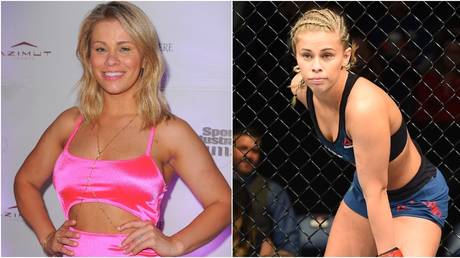