Thrilled Russian left-back Anna Sen has insisted her side’s win over France will give them “desire” and “confidence” after sealing their place in the Olympic handball quarterfinals, moving a step closer to defending their title.

Krasnodar-born Sen was involved in Russia’s handball glory at the 2016 Olympic Games in Rio, which they won by beating contenders France 22-19 in the final.

There was a higher scoreline and a narrower result as the teams met again in the group stage this time around, with Sen helping the ROC – the name Russia are playing under as a result of a ruling by doping chiefs – edge to a 28-27 victory.

“Lord, I lost my voice,” confessed the Rostov-Don star after the ROC made it five points from four games ahead of their group clash with Spain on Monday.

“My clever girls. I’m proud of everyone. Today we have proved a lot. May this victory give us even more desire to win and confidence in our abilities.”

Center-back Ekaterina Ilina, who also won in Rio and met tennis world number one Novak Djokovic for a photo shortly before the start of the current Games, scored from all of her nine shots.

Sen also enjoyed herself before the competitive action started in Japan, joining the Russian party at the opening ceremony.

“It was my first time at the opening of the Olympic Games,” she explained, sharing a montage of snaps from the launch with her fans.

“Previously, we were not allowed as we played the next day. And since I had such an opportunity, I could not miss this event.

“In general, I’m not that sentimental, to be honest. Honestly, when I entered this huge stadium, felt the energy, felt how many people watching us on TV with such great athletes… I am one of those who now represent our country at these incredible competitions.”

Sen said that her family had been proud and revealed that some of those closest to her had been unable to hold back “tears of happiness”, adding that she “received a huge Charge of Emotion” from the unforgettable experience.

Elsewhere, Sweden were level with Brazil late on at the Yoyogi National Stadium until a late push gave them victory.

The 34-31 win put the Swedes on seven points from four matches, ensuring their path to the quarterfinals. 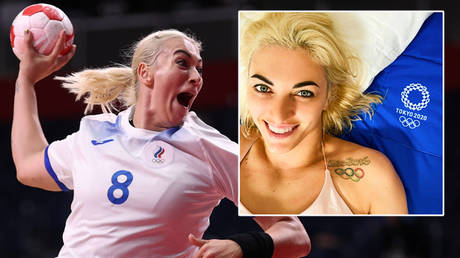