Close
Trending News
HomeSport‘I like what Khabib does… he’s one of the best lightweights’: Jorge Masvidal opens up about fighting champ Nurmagomedov

‘I like what Khabib does… he’s one of the best lightweights’: Jorge Masvidal opens up about fighting champ Nurmagomedov

‘I like what Khabib does… he’s one of the best lightweights’: Jorge Masvidal opens up about fighting champ Nurmagomedov

Jorge Masvidal’s pay dispute with the UFC has left the 2019 Fighter of the Year in a state of limbo but ‘Gamebred’ says he could be tempted to return to 155lbs to take on the division’s undefeated champion Khabib Nurmagomedov.

Masvidal had been considered in pole position to challenge welterweight champion Kamaru Usman after dispatching contenders like Darren Till, Ben Akren and Nate Diaz last year but an ongoing impasse with the UFC hierarchy has meant that the veteran fighter has been on the shelf since November.

Gilbert Burns will take Masvidal’s place in his own title bid against Usman on ‘Fight Island’ next month, leaving Masvidal – one of the sport’s most popular fighters – without a dance partner.

Masvidal, though, has stated on several occasions that he will be open to fighting anybody so long as the compensation for doing so meets his standards, and apparently that includes UFC lightweight champion Khabib Nurmagomedov.

“If they pay me what I’m worth? To go down to 155 [lbs]? A hundred percent,” Masvidal said in an Instagram Live chat.

“I like what Khabib does. I like that he’s in the field. He’s one of the best lightweights at the weight currently. Just that obstacle alone would be enough for me to consider dropping that weight. But then, the UFC would have to be working for it.”

Nurmagomedov already has his plate full with the impending challenge of Justin Gaethje on his horizon and, if rumors are true, Conor McGregor might well be waiting for him after that.

However, a title challenge from Masvidal – who has spent a sizeable part of his career at 155lbs – would likely command a massive audience and potentially hand ‘Gamebred’ the type of paycheck he appears to crave.

Of course, Masvidal has some experience in handing dominant grapplers their first career defeats. It was a little less than a year ago that he scored the 2019’s most iconic finish when he defeated Ben Askren via flying knee knockout just five seconds into their fight at UFC 239, and any repeat of that finish against the unbeaten Russian would immediately place Masvidal into MMA folklore. 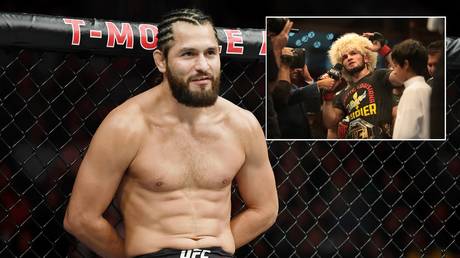