Khabib Nurmagomedov’s American-based coach Javier Mendez says the UFC lightweight champion will continue the legacy of his late father Abdulmanap by himself becoming a trainer.

Abdulmanap Nurmagomedov died at the age of 57 in a Moscow hospital earlier in July after suffering complications stemming from a Covid-19 infection.

His death triggered an outpouring of emotion from within the MMA community in Russia and beyond, such was Nurmagomedov Sr’s impact as a trainer and the man who raised Khabib to become one of the most dominant forces the sport has seen.

Amid the grief, Khabib himself has not yet spoken publicly on his father’s passing, although talk in some quarters has turned to what it may mean for the UFC lightweight champion’s future octagon plans, and in particular his title defense against interim champion Justin Gaethje which is reportedly set for September.

Khabib’s long-time coach at his American Kickboxing Academy (AKA) base in California, Javier Mendez, said that he had not spoken directly with Khabib about his plans, but that he will support his fighter whatever decision he makes.

“Khabib always said more or less he was going to do what his father wanted him to do. It was up to father, father decides if he continues to fight or not, to let him know when it’s done. Everything he did was based on his father’s approval,” Mendez told MMA journalist Luke Thomas on his SiriusXM show.

“No (I don’t want to speculate about his plans), I’m not in that poor kid’s head. Whatever he wants to do, I’m behind him because he needs support in any capacity I can give him.

“If he wants to fight, I’m with him, if he wants to retire, I’m with him. I’ll support whatever decision he makes as long as I feel it’s the right decision for him, if I don’t then I’ll speak out about it. It’s hard what to speculate, I haven’t spoken to him.”

Mendez added, however, that he was certain that Khabib would continue the legacy his father had established as a respect trainer in his Dagestani homeland and further afield.

“I know one thing, (Khabib’s) carrying on with the legacy of his father and being a great coach himself. He’s already doing that, he’s been doing that for the past four or five years, helping coach Islam (Makhachev) and other up-and-coming stars.

“(Abdulmanap) had built up a monster roster that’s coming through, and I’ve been privileged to be part of that.”

After missing out on witnessing first-hand Khabib’s ascension to the top of the UFC due to US visa troubles, Abdulmanap was finally able to corner his son for a UFC bout when he was at his side for Khabib”s last title defense against Dustin Poirier in Abu Dhabi last September.

Mendez said that had been a special moment for him, as it allowed his fellow coach to share some of the attention he deserved for molding Khabib into such a formidable force.

“Yeah, it really was (special) because that was the first time his father got to be there, I was so happy to see that myself… his father deserved to be in the spotlight,” Mendes said.

He paid tribute to Abdulmanap, who was laid to rest in his home village in Dagestan last weekend, by hailing him as an “icon” for the sport he loved so much.

“He’s got an army of people he coached, he’s an icon, he’s got a legacy he’ll leave behind. He did so much and was working on so much more to branch out his style around the world, bringing his knowledge. He was always working to bring more martial arts worldwide,” Mendez said. 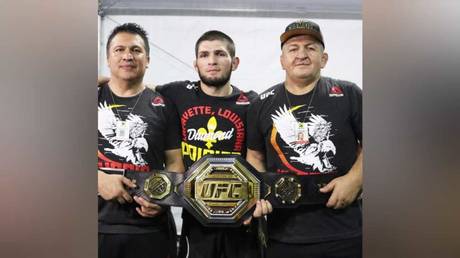