American surfing king Kelly Slater has triggered more controversy with his input on the debate surrounding vaccine mandates, claiming to know more than most doctors and telling people to “open their minds.”

Slater courted contention earlier this year when he said he would not be comfortable getting jabbed but insisted that he was not anti-vaccine.

The 11-time World Surf League champ has now ignited more anger, this time with his response to a seemingly innocuous post from a little-known Australian account on Instagram.

“Thank you to everyone that has been vaccinated this year against Covid-19. If you haven’t already, please join us and get jabbed,” wrote the ‘Summer of Surf’ account in a pro-vaccine message to followers.

“In addition to reducing both the risk of catching, and the severity of the disease, it is also our only way back to normality long term.”

Among those to initially chime in was Aussie Ironman star Trevor Hendy, who shared his opposition to mandatory vaccines.

“It’s people’s choice… Love to all who do or don’t take the procedure. Respect to all, not games and sides,” Hendy wrote.

That prompted fellow Ironman king Matt Poole – whose profile has been boosted by his relationship with Instagram influencer Tammy Hembrow – to launch a stanch defense of vaccine programs.

“The next time I head down to surfers I’m going to jump in the rip [dangerous current] because ‘freedom of choice’,” wrote the 32-year-old Poole.

“Trev you understand that – you just said you can’t dictate to me what is or isn’t potentially dangerous.

“It’s no issue for me, but as soon as I start telling others there is no danger in the rip, they’ll jump in too, and tell their mates and before you know it, there is a 100 of us in there. But Trev – that’s our choice.

“Now some of the 100 get in trouble, and lifesavers come to save them… putting those lifesavers in danger as well.

“Now 50 are drowning and the lifesavers are overrun and can’t save them all or themselves…. But that was our choice.

“It’s not freedom of choice if it impacts others – it’s about helping others.”

That’s where Slater rode in, issuing a rant in which he claimed to know more than most doctors about maintaining his health.

“@matt_poole1 let me explain why your analogy makes no sense,” raged the 49-year-old.

“If I know the risks (informed consent) and I judge the choice to be one that benefits/hurts me based on stats and info and my own ability (health), I can choose accordingly.

“If something happens to me it’s on me, not someone else. Your argument is a false equivalence. Apples and oranges.

“If 99.7% of all people would be fine with no lifeguard while in that rip and they’re given all the possibilities, most could swim the most dangerous part of that beach without risking drowning.

“And plenty of people drive without seatbelts. We can agree that’s statistically not a great thing at speed but it’s still your choice, not mine. And my seatbelt (like the gene therapy) doesn’t save you so that’s another fallacy.

“Now regarding Covid…21 total deaths in OZ under the age of 30 and 6 below 20. This is clearly a disease of obese, unhealthy, and elderly if you study the official statistics.

“And for people saying listen to the doctors, I’m positive I know more about being healthy than 99% of doctors, but I wouldn’t trust me. But most of my Covid info comes directly from doctor friends, many of them in disagreement with the official ‘science’.

“I had another of many friends have horrible reaction to the vaccine just today. She thought she was dying and fears her quality of life has changed in the past few days for good.

“My mom also is part of those underreported stats. Other friends have literally died from it. So anyone here shaming people who are affected or concerned does nothing but feed the ego.”

Slater further claimed: “When you study and talk to health professionals that deal with actual health and find out about the immune system suppression from the vaccines one day, you’ll open your mind to it.

“Don’t worry, plenty of doctors also talk about this but your algorithm isn’t feeding it to you. It’s wild that people don’t believe we are born with the ability of our bodies to adjust and prepare for different health issues. Covid exposes the unhealthy underlying patterns and issues in people.”

Slater was berated for his comments, with Aussie Ironman Jett Kenny responding: “I hope you’re this invested in our sport and the topics around it when we are competing and when the professional series is on.

“Would be amazing to have your support and exposure.

“Unless you’re just here for your personal beliefs and the argumentative/debate side of vaccinations and knowing more about being healthy than 99% of doctors?

“Regardless, I’d love to know how you’ve ended up on a nippers Instagram post debating vaccinations and choices.”

Australia has fared better than many in terms of Covid casualties, having implemented strict quarantine measures for lengthy periods in many parts of the country.

The most recent data shows that Australia has suffered around 156,000 cases and 1,622 deaths out of a population of just over 25.5 million.

In Slater’s US homeland, however, the situation has been markedly different.

America has suffered over 730,000 deaths from Covid since the start of the pandemic with more than 45 million cases recorded. 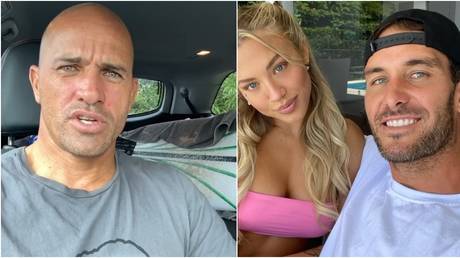 Gold prices on the rise amid fears...

All or nothing: Emelianenko could...