In his latest Twitter rant, UFC bad boy Conor McGregor has attacked lightweight challenger Tony Ferguson and threatened to ‘end’ his life while also stating a desire to ‘kill’ a rival in the octagon one day.

Recently seen in Rome – where he allegedly attacked a famous Italian DJ on the same weekend his son Rian was christened in the Vatican – McGregor has been in the headlines for all the wrong reasons as of late.

Days before his antics in the Eternal City, he was also involved in a spat online with the manager of former nemesis Khabib Nurmagomedov, telling Ali Abdelaziz he will “celebrate” when the Egyptian dies while also having a dig at the wrestling hotbed that Khabib hails from in Dagestan.

Dubbed a “bully” by the likes of former middleweight champion and now-pundit Michael Bisping, and told he was making other fighters “look bad” by double-champ Henry Cejudo for picking on members of the public, McGregor has now been criticized by someone else in MMA for different reasons.

Once tipped to meet either McGregor or Nurmagomedov when each man was lightweight champion, fading great Tony Ferguson has suggested that the Irishman’s new bulked-up physique might be down to dabbling in illegal substances.

After McGregor shared a picture of himself in “horse country” and posing on the bonnet of a Bentley, a user remarked that he was “not getting in a cage that big” when finally making his return to the UFC following a leg break in a trilogy bout loss to Dustin Poirier this summer.

“All I read was ‘Look how big he has gotten’ My man!” McGregor quote tweeted.

“These clowns are f*cked when I get back.”

Taking Growth Hormone Will Do That To Someone’s Build. You’re Mentally Weak & Your Leg Is Compromised. Your Fragile, Frail & Breakable. That GH Gon’ Make U Break Kid. Keep Pumpin’ Ya Chest Ya Cheat. Not The 1st Time God Punished You. You Like Picking On People And DJ’s? WTF Pussy pic.twitter.com/mtYmMRWU4r

In the replies section, up popped Ferguson, who wrote: “Taking growth hormone will do that to someone’s build. You’re mentally weak and your leg is compromised.

“That growth hormone gon’ make you break, kid. Keep pumpin’ ya chest, ya cheat. Not the first time God punished you. You like picking on people and DJ’s? WTF p*ssy,” the California native signed off, as well as leaving a bizarre meme of disgraced comedian Bill Cosby in front of various boxes of chicken nuggets in a nod to the nickname he gives McGregor – ‘McNugget’.

Tony was douped into signing with another agency on the premise he would receive a pro Baseball contract hahahaha a pro fucking baseball contract 😂😂 now he’s in legal turmoil with this crowd ahahahah no shit Jose canseco what did you fucking think would happen 😂 empty head.

In a separate tweet, McGregor then made outlandish claims of his own.

“Tony was duped into signing with another agency on the premise he would receive a pro Baseball contract,” the 33-year-old began.

“No sh*t Jose Canseco,” he said, referencing a popular former baseball player. “What did you f*cking think would happen, empty head?”

Why you delete this? pic.twitter.com/9g0mTIS4VS

“I am going to share your scared wife’s video that was sent to us of you screaming, crying as you smash your house up,” he threatened, mentioning an incident in which Ferguson’s partner ended up filing a restraining order against him.

“What a sad b*stard you are. No brains. Empty head. Losing streak. No management. Wife sending us videos in fear.”

I don’t give a fuck I just want your money.

Life is a mirror.

“I don’t give a f*ck I just want your money,” McGregor also posted separately.

“And everyone wants yours,” chimed in a follower, to which McGregor fired back: “Life is a mirror.”

“Sauce. Money. Power,” he posted too, before revealing, perhaps in a nod to his erratic behavior as of late: “If the numbers dip I’ll change.

“Until then, hahahahahaahahahah,” McGregor menaced.

If the numbers dip I’ll change. Until then hahahahahaahajajah

Back on Ferguson, McGregor went into another rant which has now also been taken down.

“Me and you are fighting one day mate and I’m gonna end your life in there full of it,” it started.

“Sauce. Money. Power. I already won all the belts and the money in this game,” he bragged.

“I just wanna kill one of you rats in there now it’s the only thing left for me to do. And watch me do it. Only on PPV.” 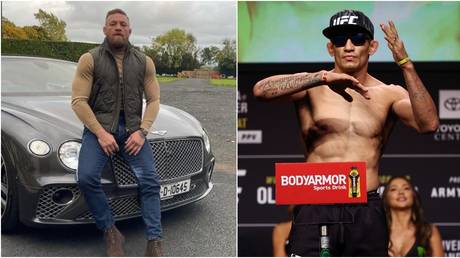