Footballers who do not take a Covid-19 vaccine must take on the “moral and economic responsibilities” of their decision, according to a top club doctor who claims players are “conditioned” by “untrue” information they see online.

Gianni Nanni, who is Serie A side Bologna’s team doctor and a member of the FIGC medical commission, revealed that there are at least three players who do not want to take a vaccine among the Italian top-flight club’s squad.

A recent outbreak at rivals Spezia, where 15 players became infected, has made the medic even more determined to persuade players to take treatment and ignore what he believes is a wealth of misinformation on the internet.

“The obligation to vaccinate against Covid?,” he asked ANSA. “I would put it [in law] but I am not a jurist, [so] I don’t know if it can be done.

Spezia’s chief medic confirms the outbreak of COVID-19 within the squad was caused by ‘two anti-vax players’ who refused the vaccine.

“Those who do not get vaccinated, however, must take on the moral and economic responsibilities of a possible outbreak that it can cause.

“On average, in each team, there are two or three unvaccinated [members] in groups of about 55 people.

“Unfortunately, some fall into lies and nonsense on the internet. We are trying to convince everyone, explaining that it is a question [of personal] safety for oneself, for the team group and for their families.”

Nanni explained that fans in Italy will be asked to prove that they have been fully vaccinated, have immunity or show proof of a negative test taken within the 48 hours before kick-off – measures which are increasingly familiar to supporters, including those who attended Euro 2020 matches in London.

“The first two methods are totally safe, while for the third I have some doubts,” Nanni told Il Resto del Carlino.

“What if someone was infected after having the swab and therefore in the 24 hours preceding the event? A stadium with total capacity but with only those recovered from the virus or vaccinated would be safer.”

Regarding his plans for potential anti-vaxxers in his team, Nanni said: “The Spezia case has taught us that it takes very little to trigger an outbreak. We will try to explain to these people that the vaccine is not dangerous: I hope the non-vaxxers change their minds.”

“We provided the first dose of the vaccine, but two players didn’t want to have it because they consider themselves anti-vaxxers and a small cluster of cases then developed,” he explained to radio station Punto Nuovo radio.

“Fortunately, all the boys feel fine. All the clubs are working on administering the vaccinations.” 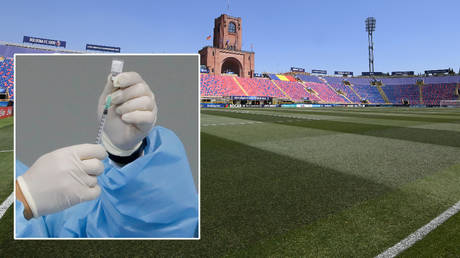