Close
Trending News
HomeSport‘I hold his hand & ask if he recognizes me’: Khabib warns of ‘tough recovery’ for father Abdulmanap after Covid-19 stroke

‘I hold his hand & ask if he recognizes me’: Khabib warns of ‘tough recovery’ for father Abdulmanap after Covid-19 stroke

‘I hold his hand & ask if he recognizes me’: Khabib warns of ‘tough recovery’ for father Abdulmanap after Covid-19 stroke

UFC lightweight champion Khabib Nurmagomedov says his father Abdulmanap remains in intensive care following his hospitalization for heart problems stemming from Covid-19, but that he is able communicate at a basic level.

Abdulmanap Nurmagomedov, 57, is currently being treated in a Moscow military hospital as he recovers from a stroke brought on by a coronavirus infection.

He had been placed in an induced coma following heart bypass surgery, but was recently reported to have regained consciousness as his condition appears to have improved.

Speaking on Russian television on Monday, Khabib himself gave an update, revealing he is at his father’s bedside daily to watch over him.

“The coronavirus itself is behind him, but the virus has had consequences for his kidneys and his heart.

“As for the virus, there’s no need to worry, only about the other consequences.”

The undefeated UFC fighter detailed his visits to his father and moving efforts to re-establish communication with him.

“I visit him, he recognizes me, but there’s no communication because he’s connected to [medical] devices.

“Every day they let me in, I spend half an hour [with him], I hold his hand.

“When I ask: ‘Father, do you recognize me?’ He gestures and lets me know.”

The 28-0 fighter further paid tribute to the doctors attending his father, praising them as among “the best in the world.”

“These are some of the best doctors in the world… I have no concerns [about my father’s care], many thanks to them.

“In that respect, all’s well. It takes time, because the consequences are very difficult, and the rehabilitation period will be long and tough,” he warned.

Abdulmanap first fell ill in his native Makhachkala, Dagestan in April, but was misdiagnosed as having simply pneumonia-like symptoms.

After his condition deteriorated his family sent him to a military hospital in the Russian capital, where he was diagnosed as having Covid-19.

Upon his arrival, Khabib, 31, was offered to be tested for the disease, but instead insisted all focus be centered on his father, who later suffered a stroke and underwent an emergency operation to restore normal blood flow around his body. 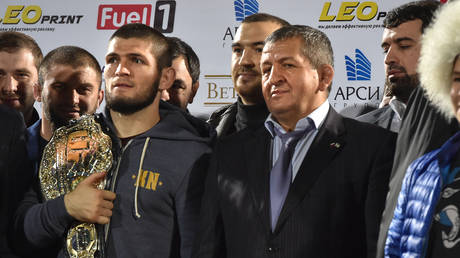