Close
Trending News
HomeSport‘I have to talk to show participants’: Alina Zagitova reveals ‘problems’ of being a TV host

‘I have to talk to show participants’: Alina Zagitova reveals ‘problems’ of being a TV host

‘I have to talk to show participants’: Alina Zagitova reveals ‘problems’ of being a TV host

Reigning world and Olympic figure skating champion Alina Zagitova has talked about her debut as a TV presenter, admitting that she doesn’t feel comfortable in her new role as she’s constantly battling with anxiety and shyness.

The 18-year-old, who has put her competitive career on hold, hosts the popular skating show ‘Ice Age’ on Russia’s Channel One, together with famed athlete Alexei Yagudin.

Her TV debut triggered mixed reactions from figure skating lovers, some of whom had criticized the idea of inviting Zagitova to the show, insisting that her inexperience and inability to improvise would negatively affect the program’s ratings.

The prominent skater admitted that she has trouble with adjusting to her new role, expressing the hope that, with the necessary experience, she’ll be able to feel more comfortable in front of the camera.

“Spectators just watch and admire the beautiful show. But there is a true competition there and then you have to ask questions to participants, like a professional journalist. And this is a real problem, you need to quickly react, knowing what to say in this particular moment and be engaged in a dialogue with
competitors,” Zagitova explained.

The most decorated female skater in Russian history noted, however, that she has gained the necessary confidence after recording several episodes of the show.

The skater paused her professional career last year, explaining that she needed a respite after two hard seasons during which she scooped European, world and Olympic titles. 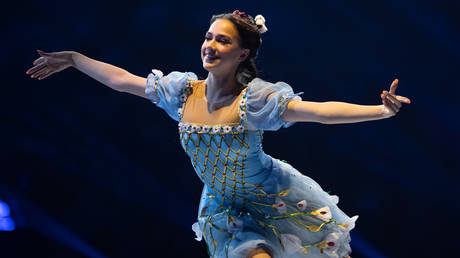